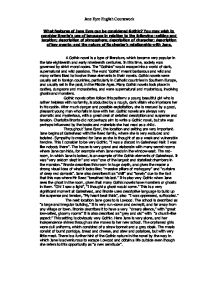 What features of Jane Eyre can be considered Gothic?

What features of Jane Eyre can be considered Gothic? You may wish to consider Bronte's use of language in relation to the following: setting and location; description of atmosphere; description of character; description of key events; and the nature of Rochester's relationship with Jane. A Gothic novel is a type of literature, which became very popular in the late eighteenth and early nineteenth centuries. In this time, society was governed by strict moral codes. The "Gothics" would escape into a world of dark, supernatural and wild passions. The word 'Gothic' meant barbarous and wild and many writers liked to involve these elements in their novels. Gothic novels were usually set in foreign countries, particularly in Catholic countries in Southern Europe, and usually set in the past, in the Middle Ages. Many Gothic novels took place in castles, dungeons and monasteries, and were supernatural and mysterious, involving ghosts and monsters. Gothic novels often follow this pattern: a young beautiful girl who is rather helpless with no family, is abducted by a rough, dark villain who imprisons her in his castle. After much danger and possible exploitation, she is rescued by a good, pleasant young man who falls in love with her. Gothic novels are always very dramatic and mysterious, with a great deal of detailed description and suspense and tension. Charlotte Bronte did not perhaps aim to write a Gothic novel, but she was perhaps influenced by the books and materials she had read as a child. Throughout 'Jane Eyre', the location and setting are very important. Jane begins at Gateshead with the Reed family, where she is very excluded and isolated. Sympathy is created for Jane as she is thought of as a weak and vulnerable heroine. This I consider to be very Gothic. "I was a discord in Gateshead Hall: I was like nobody there". The house is very grand and elaborate with many secret rooms where Jane can hide, for example when Jane reads in the window-seat. ...read more.

This is another Gothic feature as it shows how bad the conditions were where Jane Lived. This creates sympathy for Jane, and we see her as quite vulnerable. In many Gothic novels, the heroines do not live simple lives, and often things like diseases or illnesses occur to reiterate the heroines poor living conditions. There are many features in 'Jane Eyre' that are not considered to be Gothic, and one of them is Jane's personality. In a traditional Gothic novel, the heroine is vulnerable and beautiful, meek and trusting, but Jane is mentally strong, and opinionated. The way that Jane was excluded and victimised is very Gothic, but Bronte turns the Gothic tradition upside down in the way that Jane is not like a normal heroine because Jane is not very pretty or innocent. Normal heroines would be very beautiful, but Jane describes herself as "poor disconnected and plain." As a reader, she reminds us of her plainness and small size. Jane was glad to get away from Mr. Brocklehurst and the dreary Lowood Institution. Little did she know that moving to Thornfield would change the rest of her life. Mr Rochester is the main feature of Thornfield because he owns the mansion, although he is rarely home. It is nearly a year before Jane and Mr Rochester meet. This creates mystery to both Jane and the reader, because Jane is eager to meet him, after everything she has heard about him. This anticipation keeps the reader interested and wondering what will what happen when they meet, making it very effective for the reader. The meeting of Jane and Mr Rochester goes against the traditional Gothic novel because normally the hero would save the "heroine", but in this case it is the other way round. The situation Jane is in is very Gothic because it is the middle of the night and it is dark and frightening. ...read more.

Jane also has a revelation, which makes her return to Thornfield. "I heard a voice somewhere cry, Jane, Jane, Jane...it was the voice of Edward Fairfax Rochester." This supernatural calling to Jane could be considered to be very Gothic. Taken as a whole, there are many Gothic features in the novel, as Jane, the heroine begins being poor and lonely and ends up being rich and loved. Jane, the orphan, finds a good family to replace the unkind Reed family, and falls in love. These are all the basic ingredients for a traditional Gothic novel. However there are many other factors that a Gothic novel must have. It is not just the plot that contains many Gothic features but also the characters in 'Jane Eyre.' The majority of the characters in the novel resemble a certain feature found in a Gothic Novel, for e.g. Mr Brocklehurst, and how he resembles a 'villain' type of character. All of the locations that Jane stays at, e.g. Lowood and Gateshead are all very dark and mysterious, like the stereotypical Gothic castle. There are lots of alarming, supernatural noises and ghostly figures. This all adds to the tension and atmosphere that Charlotte Bronte creates, using similes, metaphors and symbolism. However, there are parts where Bronte has changed the typical 'Gothic novel' around. For example, at the meeting of Jane and Mr Rochester. Here it seems that Jane is the hero, and Mr Rochester is the heroine. This adds contrast and makes it seem more interesting for the reader, as they would it expect Jane to be the heroine, and Mr Rochester the hero. The ending is not to be considered Gothic either, because, although they fall in love at the end, Mr Rochester's mansion is burnt down and he is blind. This would normally contradict a normal Gothic novel, where everything would end happily. Charlotte Bronte has not completely written a Gothic novel, however 'Jane Eyre' does have many features which could be considered Gothic. Jane Eyre English Coursework ...read more.