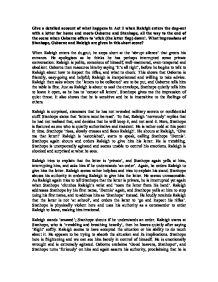 What happens in Act 2 when Raleigh enters the dug-out with a letter for home and meets Osborne and Stanhope, all the way to the end of the scene when Osborne offers to 'stick (the letter flap) down'.

Give a detailed account of what happens in Act 2 when Raleigh enters the dug-out with a letter for home and meets Osborne and Stanhope, all the way to the end of the scene when Osborne offers to 'stick (the letter flap) down'. What impressions of Stanhope, Osborne and Raleigh are given in this short scene? When Raleigh enters the dugout, he stops short at the 'abrupt silence' that greets his entrance. He apologises as he thinks he has perhaps interrupted some private conversation. Raleigh is polite, conscious of himself, well-mannered, even-tempered and obedient. Osborne then reassures him by saying 'It's all right', before he begins to talk to Raleigh about how to inspect the rifles, and what to check. This shows that Osborne is friendly, easy-going and helpful; Raleigh is inexperienced and willing to take advice. Raleigh then asks where the 'letters to be collected' are to be put, and Osborne tells him the table is fine. Just as Raleigh is about to seal the envelope, Stanhope quietly tells him to leave it open, as he has to 'censor all letters'. Stanhope gives me the impression of quiet threat. ...read more.

Raleigh seems to have accepted the situation or his ability to do much about it. He appears to be trying to absorb the situation and its implications. Stanhope here is frightening and we can see him barely in control of himself. He is emotionally wrought and is extremely agitated. Osborne exclaims 'Good heavens, Stanhope!', and Stanhope turns 'furiously' on him and again asserts his authority, proclaiming that he is the commander of this company, and will 'ask for advice' when he wants it. Osborne only speaks now. He is probably stunned into silence earlier on. He is probably quite close to Stanhope to be able to show his astonishment in such a manner. Stanhope perhaps feels vulnerable and is not calm yet. He is still agitated and rather unreasonable. He abuses authority again and pulls rank here. Osborne shuts up, and Stanhope sits at the table, holding the letter. After a brief moment of silence, he throws the letter on the table, and holds his head in his hands. Osborne is sensitive and realises this is not the right time to say anything. Stanhope seems unable to think and seems calmer now. ...read more.

Osborne knows what to focus on - the essential bits of the letter that will reassure Stanhope. He does not tell Stanhope directly the letter's contents - he reads out the important parts and lets Stanhope judge for himself. From the letter, you can tell that Raleigh is full of admiration for Stanhope. He sees only the good and positive in Stanhope, although he must have seen some ugly stuff in the short time he has been in the company. Raleigh does not judge and seems rather accepting. He seems to 'worship' Stanhope and considers Stanhope his friend. Stanhope appears to be a good leader, who cares for his men, and who tries his utmost to motivate them, just like he motivated students back at school. He works hard, carries our duties to the best of his abilities and has a good reputation. Stanhope does not move. He sits with lowered head. Osborne asks if he should seal it. Stanhope 'murmurs' a 'yes', rises heavily and goes to the shadows by Osborne's bed. Stanhope is perhaps ashamed by his own actions and the realisation that he has overreacted and shocked by what he has heard in Raleigh's letter. He tries to 'hide' himself and tries to be apart from Osborne - hides in the shadows. ...read more.