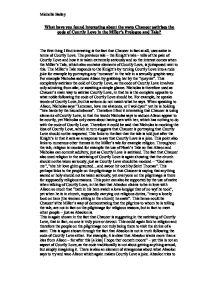 What have you found interesting about the ways Chaucer satirises the code of Courtly Love in the Miller's Prologue and Tale?

Due to these comparisons the audience is able to see who Alison would prefer, and therefore from the very beginning of the tale we can see that what Absolon is trying to do, and all the effort his is putting in - "he kembeth his lokkes brode and made him gay" - will amount to nothing. This therefore allows to audience to find all Absolon's attempts humorous and thus the code of Courtly Love is made into a joke. The theme of religion is also used in the satirising of Courtly Love to emphasise the fact that what Alison and Nicholas are doing is in fact nothing to do with Courtly Love - which is often seen as being previous and divine. For example - "swoor hir ooth....the she wol been at his comandement". The use of the word "comandement" links to the 10 Commandments in the Bible, hence Alison is suggesting that giving Nicholas her love is in fact religious. It is ironic however, that one of the 10 Commandments is "thou shalt not commit adultery" and therefore by using this word, the mockery of Courtly Love is shown, in that Alison and Nicholas have no desire to simply kiss, or worship each other from afar, but in fact break the religious code. ...read more.

Chaucer, for instance, describes the low blouse Alison wears, and "hir lends [thighs]" - which would not be mentioned if the tale was to be about Courtly Love. Alison should not respond well to Nicholas grabbing parts of her body, and although she appears to threaten him to stop or she will shoud - "lat be Nicholas or I wol crie", if she in fact followed the code of Courtly Love, she would shout without warning. The fact that words of Courtly Love are used in such a sexually graphic scene that will later lead to adultery again includes the idea of satire in that there is nothing Courtly about Alison and Nicholas' intentions and therefore between lines 168 and 185 Courtly Love is satirised using irony. Therefore in the Miller's Tale, Chaucer uses many interesting ways to satires Courtly Love. He uses mainly the characters and their faults to show the failings of Courtly Love - for example that Alison has no interest in anyone who uses it, and mocks the code by having Absolon - a ridiculed character - as the only character who pursues Alison using Courtly Love. The satirising of Courtly Love also links to other ideas of mockery and disrespect of traditionally honoured concepts (for example the church) and the belief that no one on the pilgrimage is truly religious. Michelle Bailey ...read more.