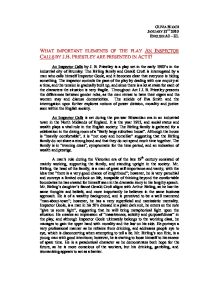 What important elements of the play An Inspector Calls by J.B. Priestley are presented in Act I?

OLIVIA BLOCH JANUARY 31ST 2010 ENGLISH A2 - HL WHAT IMPORTANT ELEMENTS OF THE PLAY AN INSPECTOR CALLS BY J.B. PRIESTLEY ARE PRESENTED IN ACT I? An Inspector Calls by J. B. Priestley is a play set in the early 1900's in the industrial city of Brumley. The Birling family and Gerald Croft is interrogated by a man who calls himself Inspector Goole, and it becomes clear that everyone is hiding something. The inspector controls the pace of the play by dealing with one enquiry at a time, and the tension is gradually built up, and since there is a lot at stake for each of the characters the situation is very fragile. Throughout Act I J. B. Priestley presents the differences between gender roles, as the men retreat to have their cigars and the women stay and discuss domesticities. The suicide of Eva Smith and the interrogation upon further explores notions of power division, morality and justice seen within the English society. An Inspector Calls is set during the pre-war Edwardian era in an industrial town in the North Midlands of England. ...read more.

He portrays a very professional manner as he refrains from drinking, and addresses people eye to eye, which is disconcerting when attempting to tell a lie. Mr. Birling's son Eric, is a young man with good intentions; however, he is starting to loose himself to his excess of spare time. He is a paradoxical character as he demonstrates both hope for the future, as he is more conscious of the workers, but his drinking, gambling, and womanizing appears to act as a barrier. During the late Victorian era, English women had very different roles and expectations depending on their status in the social hierarchy. Sybil, Mr. Birling's wife, is a "rather cold woman" who portrays unwavering control in a very uncomfortable situation. She expects Sheila to make the same sacrifices in marriage that she had to; however, there is a significant division between the two generations. Sheila, the daughter of Mrs. Birling is an overall compassionate character, who when confronted with her guilt, takes it upon herself to admit that she was wrong. She recognizes that her hysterical actions were impudent, and feels empathy towards Eva Smith as she can relate to her because of age and gender. ...read more.

The Inspector himself acts as an important element, as he is the pathway to truth, he demands justice by interrogating the characters and thereby exposing the truth. The inspector outlines a "chain of events" that may well have led to Eva Smith's death. Her suicide, seen in this way, is likely the product not of one person acting alone, but of a group of people acting alone, and it thereby resulted from several causes. Moreover, the characters in the play persistently lie to each other, and it is apparent that they have no regard for the truth as they blatantly lie several times. The lies are a part of who they are, and what they have based their relationships on; however, as the plot develops they begin to recognize that their actions and misinterpretations of the truth were solely based on their own self-indulgence. Throughout Act I, J. B. Priestley uses several important elements. The characters in the play develop a significant amount in the first act, and continue to grow into complex characters as the play progresses. Priestley uses lighting, foreshadowing, and entrances and exits in order to develop mood and underlying themes. Moreover, he draws attention to human weakness and social injustice through characterization. ...read more.