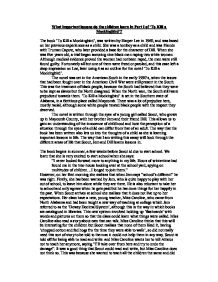 What important lessons do the children learn in Part I of 'To Kill a Mockingbird'? The book 'To Kill a Mockingbird', was written by Harper Lee in 1960, and was based on her previous experiences as a child. She was a tomboy as a child and was friends with Truman Capote, who later provided a base for the character of Dill. When she was five years old, a trial began accusing nine black men raping two white women. Although medical evidence proved the women had not been raped, the men were still found guilty. Fortunately all but one of them were freed or paroled, and this case left a deep impression on Lee, later using it as an outline for the novel 'To Kill a Mockingbird'. The novel was set in the American South in the early 1930's, when the issues that had been fought over in the American Civil War were still present in the South. This was the treatment of black people, because the South had believed that they were to be kept as slaves but the North disagreed. When the North won, the South still were prejudiced towards them. 'To Kill a Mockingbird' is set in the Southern state of Alabama, in a fictitious place called Maycomb. There was a lot of prejudice here, mostly racial, although some white people treated black people with the respect they deserved. The novel is written through the eyes of a young girl called Scout, who grows up in Maycomb County, with her brother Jem and their friend Dill. This allows us to gain an understanding of the innocence of childhood and how the perception of a situation through the eyes of a child can differ from that of an adult. The way that the book has been written also lets us into the thoughts of a child as she is learning important lessons in life. ...read more.

No matter what anybody says to you, don't you let 'em get your goat. Try fighting with your head for a change" Atticus is a lawyer who is used to winning without fighting so he is trying to teach Scout this. He is telling her that people can say things but she is not to let them affect her because it doesn't matter. She needs to learn to put up with what people say and to retaliate with words and not violence or just to ignore them. So Scout tells Cecil Jacobs to take it back but he replies with more insults. Usually she would start a fight but she walks away and he calls her a coward. She says: 'Somehow, if I fought Cecil I would let Atticus down...I could take being called a coward for him.' Scout is taught by Atticus to respect other people's opinions when they are talking about what the town thinks of the case with Tom Robinson. Scout says that Atticus must be wrong to defend him because the rest of the town think that he is wrong and they are right so Atticus says: "They're certainly entitled to think that, and they're entitled to full respect for their opinions...but before I can live with other folks I've got to live with myself." He is saying that people can think what they like but he is doing this case because if he didn't he would lose his respect as a lawyer and he would feel guilty if he didn't defend Tom Robinson because no one else will, so he is not in a position to care what they think because he needs to care about what he thinks. Scout is learning about tolerating others, their actions and their thoughts, and about the importance of pride in not fighting and not letting people get to her, and loyalty to Atticus and doing what he has told her to. ...read more.

She asks if he is one and he replies: "I certainly am. I do my best to love everybody...I'm hard put sometimes." He is not a 'nigger-lover' in most people's understanding of the term, but in a real sense of it because he does love Negroes, just as he likes everyone else. The children learn a lot from their father from the 'mad dog' incident. When the children encounter the mad dog they realise that it is a very serious thing. Scout says: 'Nothing is more deadly than a deserted, waiting street. The trees were still, the mockingbirds were silent' Scout is describing how nature and things they cannot control are reflecting the mood of the people in the street. The fact the mockingbirds had stopped singing is significant because mockingbirds always sing joyously. Perhaps this wasn't too obvious at the time but Scout could feel that there was something different happening, and because in this book mockingbirds are a metaphor for people like Boo Radley, who are innocent and do no harm, it shows that their lives would be very different without them. They had previously come to the conclusion that their father could not do anything - he worked in an office, he didn't hunt, he could not see very well, and he said he was too old to play football. The children question other people about his talents. Miss Maudie tells Scout that he can play checkers well and he can play a jew's harp, which is a small, palm-sized musical instrument, however Scout is not impressed. Calpurnia said that he could do lots of things but could not specifically say what. When the dog is coming up the street, Mr Tate hands Atticus the rifle to shoot it with. Scout says, 'Jem and I nearly fainted' because she has never known of her father to shoot anything so she does not understand why the sheriff would hand him the gun. After shooting the dog, Mr Tate comments on Atticus's aim being a little to the right, and he replies, "Always was...If I had my 'druthers I'd take a shotgun. ...read more.