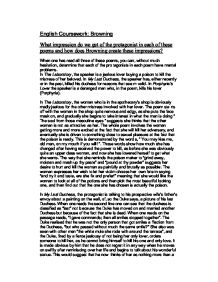 What impression do we get of the protagonist in each of these poems and how does Browning create these impressions?

English Coursework: Browning What impression do we get of the protagonist in each of these poems and how does Browning create these impressions? When one has read all three of these poems, you can, without much hesitation, determine that each of the protagonists in each poem have mental problems. In The Laboratory, the speaker is a jealous lover buying a poison to kill the mistress of her beloved. In My Last Duchess, the speaker has, either recently or in the past, killed his duchess for reasons that seem valid. In Porphyria's Lover the speaker is a deranged man who, in the poem, kills his lover (Porphyria). ...read more.

". Those words show how much she has changed after having received the power to kill, as before she was obviously quite an upper class woman, and now she has lowered herself to get what she wants. The way that she reminds the poison maker to "grind away, moisten and mash up thy paste" and "pound at thy powder" suggests her desire to hurt and kill the woman as painfully and brutally as possible. The woman expresses her wish to let her victim choose her own fate in saying "and try it and taste, ere she fix and prefer!" meaning that she would like the woman to look at all of the potions and then pick the most beautiful looking one, and then find out that the one she has chosen is actually the poison. ...read more.

She also was seen with other men "the white mule she rode with around the terrace", and the Duke, fired by a fierce jealousy of not being her only lover, orders someone to kill her, as he cannot bring himself to kill his one and only love. It is made obvious by him that he does not regret it in any way when he moves on swiftly after reminiscing over her life and begins to talk about his wonderful statue. This would suggest that he now thinks of her as nothing more than a dead person of whom he has a beautiful painting of on his wall. The way Browning makes the Duke speak as if it is unimportant is very effective as it shows the true feelings that he had for the Duchess in the first place. ...read more.