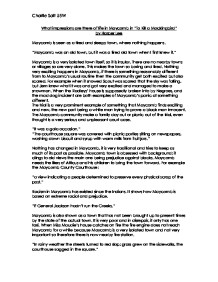 What impressions are there of life in Maycomb in &quot;To Kill a Mockingbird&quot;

What impressions are there of life in Maycomb in "To Kill a Mockingbird" by Harper Lee Maycomb is seen as a tired and sleepy town, where nothing happens. "Maycomb was an old town, but it was a tired old town when I first knew it." Maycomb is a very isolated town itself, so it is insular. There are no nearby towns or villages so are very alone. This makes the town so boring and tired. Nothing very exciting happens in Maycomb, if there is something reasonably different from to Maycomb's usual routine then the community get both excited but also scared. For example when it snowed Scout was scared that the sky was falling, but Jem knew what it was and got very excited and managed to make a snowman. When the Radleys' house is supposedly broken into by Negroes, and the mad dog incident are both examples of Maycomb's panic at something different. The trial is a very prominent example of something that Maycomb finds exciting and new, the new part being a white man trying to prove a black man innocent. The Maycomb community make a family day out or picnic out of the trial, even thought is a very serious and unpleasant court case. "It was a gala occasion." "The courthouse square was covered with picnic parties sitting on newspapers, washing down biscuit and syrup with warm milk from fruit jars." ...read more.

Caroline. She has been sent from North Alabama into a prejudiced society. As she does not come from Maycomb, she does not know the children's background. She also has pre-conceived ideas of teaching and is not at all prepared for what Maycomb gives her. Miss Caroline has already come with a disadvantage she has not got the right background, according the Maycomb Community. "North Alabama was full of Liquor Interests, Big Mules, steel companies, Republicans, professors, and other persons of no background." The roles of men and women in society are another prominent issue in Maycomb. Scout faces a lot of pressure from Aunt Alexandra to become more ladylike and less how she really is. She enjoys playing with Dill and Jem but even they start to reject because of her being a girl. Aunt Alexandra gives the idea of how a woman or girl should be and Scout does not want to be like this. "I could not possibly hope to be a lady if I wore breeches...she said I wasn't supposed to be doing things that required pants. Aunt Alexandra's vision of my deportment involved playing with small stoves, tea-sets, and wearing the Add-A-Pearl necklace." Jem isolates because she is a girl. He does not think she is brave enough or manly enough to play some of the games they like. Dill and Jem leave Scout out when they are playing and this makes Scout feeling unwanted, all because she is a girl. ...read more.

They were regarded as the lowest of the low, they do not belong with the blacks and they don't belong with the whites so they are just seen as nothing. "They're just in-betweens, don't belong anywhere." "around here once you have a drop of Negro blood, that makes you all black." The people of Maycomb find it very difficult to understand why such a thing can happen and Dolphus Raymond knows their views. That is why he pretends to be drunk all the time. "that's why he won't change his ways. He can't help himself, that's why he lives the way he does." The Maycomb community can understand this more because they think the drink is making him do such a thing. It's a more sensible choice, Dolphus is not prejudiced, but he keeps it quiet behind the "drink". Thus Maycomb is stuck in the past and is tired and old. It suffers badly from the depression because of this. Most of the white community are hypocrites and people such as Aunt Alexandra who have exactly the same views on social status, religion and prejudice fit into Maycomb "like a hand into a glove." However, the hope for the community lies in characters like Atticus who is teaching his children to be tolerant and not prejudiced: "I hope and pray I can get Jem and Scout through it without bitterness, and most of all, without catching Maycomb's usual disease. ?? ?? ?? ?? Charlie Salt U5W ...read more.