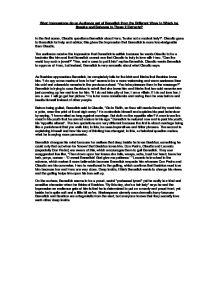 What Impressions do an Audience get of Benedick from the Different Ways in Which he Speaks and Behaves in These 2 Extracts? In the first scene, Claudio questions Benedick about Hero, 'is she not a modest lady?'. Claudio goes to Benedick for help and advice; this gives the impression that Benedick is more knowledgeable than Claudio. The audience receive the impression that Benedick is selfish because he wants Claudio to be a bachelor like him and that Benedick cannot see that Claudio is truly in love with Hero. "Can the world buy such a jewel?" "Yea, and a case to put it into" replies Benedick. ...read more.

He is far more considerate and caring than he was before and insults himself instead of other people. Before being gulled, Benedick said to Claudio, "Go to i'faith, an thou wilt needs thrust thy neck into a yoke, wear the print of it and sigh away." He contradicts himself and explains his past behaviour by saying, "I have railed so long against marriage. But doth no the appetite alter? A man loves the meat in his youth that he cannot endure in his age." Benedick is matured now and is past his youth; his 'appetite altered'. The two quotations are very different because the first is about marriage being like a punishment that you walk into; in this, he uses imperatives and bitter phrases. ...read more.

Hero is mentioned in the gulling, which confirms that Beatrice must love him because her and Hero are very close. Deep inside, I think Benedick wants to change his views and the gulling helps him open his true self up. On the surface, Benedick seems to be a proud, sexist "professed tyrant" yet he really is a kind and sensitive character when he thinks of Beatrice. "By this day, she's a fair lady" says he and the impression an audience gets of him is that he is determined to put on a manly and proud front, yet inside he is quite soft and a little bit na�ve. Shakespeare cleverly uses dramatic irony because Benedick and Beatrice are antagonistic from the start, but everyone knows that they secretly love each other deep inside. ...read more.