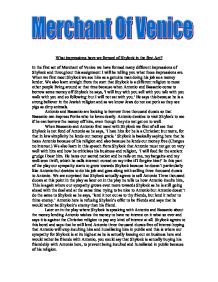 What impressions have we formed of Shylock in the first Act?

What impressions have we formed of Shylock in the first Act? In the first act of Merchant of Venice we have formed many different impressions of Shylock and throughout this assignment I will be telling you what these impressions are. When we first meet Shylock we see him as a genuine man doing his job as a money lender. We also learn straight from the start that Shylock is a different religion to most other people living around at that time because when Antonio and Bassanio come to borrow some money off Shylock he says, 'I will buy with you sell with you talk with you walk with you and so following: but I will not eat with you.' He says this because he is a strong believer in the Jewish religion and as we know Jews do not eat pork as they see pigs as dirty animals. ...read more.

He hates our sacred nation and he rails on me, my bargains and my well-won thrift, which he calls interest: cursed on my tribe if I forgive him!' In this part of the play our sympathy starts to grow towards Shylock because he doesn't particularly like Antonio but decides to do his job and goes along with selling three thousand ducats to Antonio. We are surprised that Shylock actually agrees to sell Antonio Three thousand ducats at this point in the play as later on in the play he tells us how Antonio insults him, This is again where our sympathy grows even more towards Shylock as he is still going ahead with the deal and at the same time trying to be nice to Antonio but Antonio doesn't do the same to Shylock as he says, 'lend it not out as to thy friends, but lend it rather to thine enemy.' ...read more.

Towards the end of the Act 1 Shylock makes a bond (deal) with Antonio and tells him that if he does not return the three thousand ducats within three months then he will be entitled to a pound of flesh off Antonio's body where ever he pleases, 'let the forfeit be nominated for an equal pound of your fair flesh, to be cut off your body pleaseth me.' Antonio seals to this bond (deal) and Bassanio tells him not to. Antonio ignores him and seals the bond for an equal pound of his flesh, even though he is not certain he can return the money. Overall in Act 1 we get a very positive impression of Shylock as he does his best to do the best deal for Antonio and hopes that he will be friends with him and stop humiliating him in public. As we know this does not happen. ...read more.