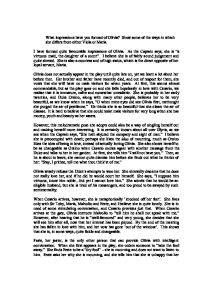 What impressions have you formed of Olivia? Show some of the ways in which she differs from either Viola or Maria.

What impressions have you formed of Olivia? Show some of the ways in which she differs from either Viola or Maria. I have formed quite favourable impressions of Olivia. As the Captain says, she is "a virtuous maid, the daughter of a count". I believe she is of fairly sound judgement and quite shrewd. She is also a countess and of high status, which is the direct opposite of her loyal servant, Maria. Olivia does not actually appear in the play until quite late on, yet we learn a lot about her before then. Her brother and father have recently died, and out of respect for them, she vows that she will have no male visitors for seven years. At first, this seems almost commendable, but as the play goes on and she falls hopelessly in love with Cesario, we realise that it is immature, na�ve and somewhat unrealistic. She is probably in her early twenties, and Duke Orsino, along with many other people, believes her to be very beautiful, as we know when he says, "O when mine eyes did see Olivia first, methought she purged the air of pestilence." ...read more.

As far as Feste is concerned, this is quite a dangerous remark, but, instead of being angry, Olivia merely replies that she knows his soul is in heaven. When Feste retorts, "The more fool, madonna, to mourn for your brother's soul being in heaven," Olivia realises that he is right, and appreciates his wit and logic. When Malvolio wonders how Olivia "takes delight in such a barren rascal," she rebukes him, saying, "O, you are sick of self-love, Malvolio." She values her steward but sees him for what he is: superior, arrogant and puritanical. She is very shrewd and observant, good at working out other peoples' characters, which is quite ironic as she falls in love with Cesario, who is in fact a woman. However, she is kind to Malvolio when she believes him to be mad - "I would not have him miscarry for the half of my dowry," and at the end, when she finds that he has been "most notoriously abused," by Maria and Sir Toby. Whereas Olivia respects Malvolio, she does not respect Sir Toby, her kinsman. ...read more.

Olivia does not doubt her because Maria is a trusted servant. She feels pity for Malvolio when he is put into a dark cell, but Maria thinks that it is funny and says to Feste, "Make him believe thou art Sir Topas the curate," which makes the situation even worse for Malvolio. At the end of the play she manages to slip away before anyone notices, which I believe shows a lack of responsibility about her. She has her fun but disappears before she can be punished, without having felt any remorse. We hear that she has married Sir Toby and that brings up another big difference between herself and Olivia: Olivia would never consider marrying anyone as vulgar and rude as Sir Toby, but Maria likes him. Olivia ultimately marries Sebastian, who is the direct opposite to Sir Toby. Maria, I think, is a very loyal servant to Olivia and they enjoy each other's company, but they are very different, socially and characteristically. Maria is a servant and Olivia is a countess. Olivia is a romantic and her character reflects Orsino's in some ways, in that she can be very changeable. Maria, on the other hand, seems to be more vivacious and carefree. ...read more.