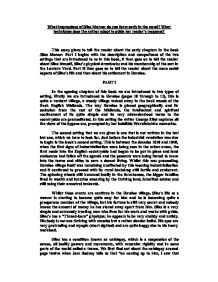 What impressions of Silas Marner do you form early in the novel? What techniques does the author adopt to guide her reader's response?

What impressions of Silas Marner do you form early in the novel? What techniques does the author adopt to guide her reader's response? This essay plans to tell the reader about the early chapters in the book Silas Marner. Part I begins with the description and comparisons of the two settings that are introduced to us in this book, it then goes on to tell the reader about Silas himself, Silas's physical drawbacks and his membership of the sect in the Lantern Yard. Part II then goes on to tell the reader about the more social aspects of Silas's life and then about his settlement in Raveloe. PART I In the opening chapters of this book we are introduced to two types of setting. Firstly we are introduced to Raveloe (pages 10 through to 12), this is quite a verdant village, a woody village tucked away in the back woods of the fresh English Midlands. The way Raveloe is placed geographically and its seclusion from the rest of the Midlands, the intellectual and spiritual confinement of its quite simple and its very misunderstood tastes to the countryside are premeditated. ...read more.

The leader of the sect Deacon is suffering from a very bad illness; almost knocking on heavens door and it was Silas's turn to watch him. Whilst he watches him he falls into a fit and William Dane knows this and takes advantage of it, by going in to the room and stealing the churches money from the cabinet where it is kept. He uses Silas's knife, which he borrowed a few days before to cut some cloth, to pick the lock so he cannot be framed for the theft. Silas is obviously found guilty and banished from the sect; he does not only lose his religion but his best friend and fianc�e too. In this sect at Lantern Yard Silas has a major to play in the running and organization inside of the sect. He does his fair share of the work for it and is very highly thought in the sect. He is a man of exemplary life and he has a great faith in god and its surrounding faith. He was very trusting and thought that his best friend and fianc�e would not abandon him in his moment of need and when they did he was ashamed to have even known them and upon losing them, he lost his life and everything that meant anything to him. ...read more.

a word, they suspected that this stare gave the children or even adults a disease that would paralyse them or even kill them. They already knew that Silas had learnt about herbal remedies and this struck both fascination and fear into them. The ladies in Raveloe know that he is in not interested in them or he never lets anyone over his doorstep to talk or never goes for a quiet drink in the pub. Silas sits at his loom working all day because he has nothing left to do, while doing this he becomes quite prosperous. The gold that he earns replaces everything that he had from Lantern Yard. The rhythm and framework has gone from his life ever since he was banished from the sect. He lost all his belief in God, lost and any routine that he once might have had but now all he is left with is his loom and gold. The routine that he had is now replace by the counting of his gold, he enjoys doing this because it is warm and soft to touch, another reason we are given for his counting of the gold is he thinks that gold cannot betray him like his old friends did. ...read more.