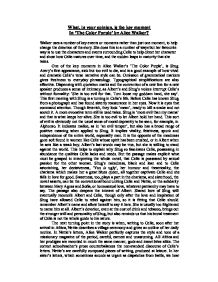 What, in your opinion, is the key moment In 'The Color Purple' by Alice Walker?

What, in your opinion, is the key moment In 'The Color Purple' by Alice Walker? Walker uses a number of key events or moments rather than just one moment, to help change the direction of the story. She does this in a number of ways but her favourite way is to use the characters and events surrounding Celie to help direct her character and show how Celie matures over time, and the sudden leaps in maturity that she takes. One of the key moments in Alice Walker's 'The Color Purple', is Shug Avery's first appearance, sick but too evil to die, and is a good example of how vivid and dramatic Celie's terse narrative style can be. Omission of grammatical markers gives freshness to everyday phraseology. Typographical simplifications are also effective. Dispensing with quotation marks and the convention of a new line for a new speaker produces a sense of intimacy, as Albert's and Shug's voices interrupt Celie's without formality: 'She is too evil for that. Turn loose my goddam hand, she say'. This first meeting with Shug is a turning in Celie's life. Before Celie has known Shug from a photograph and has found sisterly reassurance in her eyes. ...read more.

The writing is functional and makes its points clear. These often serve to interweave themes shared by the African and American parts of the story. The ceremony of delivering the roof is part of the villagers' welcome when Samuel, Corrine, Nettie and the children arrive at their African mission station. A villager has just told the Olinka tale, related by Nettie, of a greedy chief who used land assigned to the sacred roofleaf for his own private cultivation. The ritual of honouring a new roof is preserved among the people as a mark of reverence for the leaf itself. Here, in a surprising shape, is an African God. Yet Celie will not be completely surprised when she reads about it because Shug is teaching her to see the divine in trees and in all of nature rather than the patriarchal images of Christianity. The next letter reveals another connection, in the theme of education for girls. Nettie regrets the backwardness of the Olinka men, and Olinka women who submit to their prejudices, wherever this impedes female emancipation. For example, the villagers send boys to school but not girls. The child Olivia, who makes it without hesitation, spots a comparison with America: 'They're like white people at home who don't want coloured children to learn'. ...read more.

The conviction Walker gets into his words serves her purpose because it shows how instinctive his contempt is. She wants the reader to believe that all men, Olinka, American, black and white, share this unthinking assumption that a woman is inferior. This is the most powerful of all encounters between Albert and Celie: it demonstrates very forcefully the lightly spoken ironic reversal of a common sexist saying, 'Where there's a woman, there's trouble, which opens the letter. That little bit of mister means trouble. 'Amen', meaning 'so be it', the traditional close to a Christian prayer, becomes the closing word of Celie's letters when she stops writing to God, in the letter where Shug speaks about the divine Spirit everywhere, and writes to Nettie instead. Shug is allowed the last word in the present crucial letter, which proclaims that not all the male contempt in the world can reduce Celie to 'nothing at all'. 'But I'm here,' she says, and Shug says 'Amen', three times. Walker means it to be a sacred affirmation. So Walker uses a number of key events or moments rather than just one moment, to help change the direction of the story. She does this in a number of ways but her favourite way is to use the characters and events surrounding Celie to help direct her character and show how Celie matures over time, and the sudden leaps in maturity that she takes. ...read more.