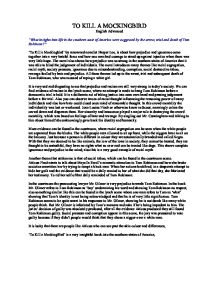 &quot;What insights into life in the southern state of America were suggested by the arrest, trial and death of Tom Robinson?&quot; - 'To Kill a Mockingbird' by renowned novelist Harper Lee.

TO KILL A MOCKINGBIRD English Advanced "What insights into life in the southern state of America were suggested by the arrest, trial and death of Tom Robinson?" 'To Kill a Mockingbird' by renowned novelist Harper Lee, is about how prejudice and ignorance come together into a very hateful force and how one man had courage to stand up against injustice when there was very little hope. The novel also shows how prejudice was so strong in the southern states of America that it was able to blind the judgement of individuals. The novel introduces many themes like racial segregation, racial myth, society pressure, ignorance due to misunderstanding, corruption, social destructive taboo, revenge fuelled by hate and prejudice. All these themes led up to the arrest, trial and subsequent death of Tom Robinson, who was accused of raping a white girl. ...read more.

By singling out Mr. Cunningham and talking to him about himself she unknowingly gave back his identity and humanity. More evidence can be found in the courtroom, where racial segregation can be seen when the white people are separated from the blacks. The white people area allowed to sit up front, while the niggers have to sit on the balcony. Just because a person is different in colour they are automatically branded and called Negro. With that they are deemed to be like animals, the low of the lows in society, they cannot be trusted, they are thought to be untruthful, they have no rights what so ever and can be treated like dogs. This shows complete ignorance and prejudice in the mind; also this is a very good example of racial myth. ...read more.

Tom Robinson seems to be quite smart in his responses to Mr. Gilmer, showing he is not dumb like many white people think. But Mr. Gilmer is infuriated by Tom's answers and asks if he's being impudent to him. The juries' decision of guilty was absolutely profound, after all the evidence Atticus produced they still found Tom Robinson guilty. Social pressure and corruption appear in this scene, the jury was pressured to vote guilty because if they didn't people would think that they chose a nigger over a white man. It is lucky that there are people like Atticus who can see past the skin colour and differences, 'To Kill a MockingBird' is a very insightful book into the southern states of America, ...read more.