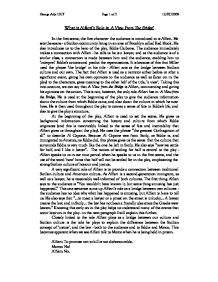 What is Alfieri's Role in 'A View from the Bridge'?

What is Alfieri's Role in A View From The Bridge? In the first scene, the first character the audience is introduced to is Alfieri. He sets the scene - a Sicilian community living in an area of Brooklyn called Red Hook. He also introduces us to the hero of the play, Eddie Carbone. The audience immediately makes a connection with Alfieri - he tells us he is a lawyer, and as the audience is of a similar class, a connection is made between him and the audience, enabling him to 'interpret' Eddie's actions and predict the repercussions. It is because of this that Miller used the phrase 'the bridge' in his title - Alfieri acts as the bridge between Sicilian culture and our own. The fact that Alfieri is used as a narrator either before or after a significant event, giving his own opinions to the audience as well as (later on in the play) to the characters, gives meaning to the other half of the title, 'a view'. Taking this into account, we can say that A View from the Bridge is Alfieri, commenting and giving his opinions on the action. This is not, however, the only role Alfieri has in A View from the Bridge. He is used at the beginning of the play to give the audience information about the culture from which Eddie came, and also about the culture in which he now lives. ...read more.

This shows that Sicilians in the time in which Alfieri is speaking have learnt to compromise - the most lawless aspects of 'justice' have perhaps been suppressed, and replaced with other methods of showing disapproval within a community, as well as a respect for American law. Throughout the play, Miller uses Alfieri to convey a sense of fate to the audience. We perceive this first during Alfieri's opening speech: "...the thought comes that in some Caesar's year, in Calabria perhaps... another lawyer, quite differently dressed, heard the same complaint and sat there, powerless as I, and watched it run its bloody course." The word 'powerless' suggests that future events in the play will be inevitable: Alfieri will try to stop them from happening, but will be unable to stop it; 'bloody course' suggests that the events to come will be unpleasant. Alfieri also portrays inevitability in his exits: at the end of his opening speech, he walks into darkness - this suggests a dark occurrence ahead of Alfieri. Another way in which Alfieri conveys a sense of fate is through his description of Eddie - "His eyes were like tunnels..." - a tunnel is a path with only one direction in which to travel, and ultimately one destination; it is impossible to deviate from the path of a tunnel, which implies that the events leading up to the 'main' event, that is, Eddie's death, are also inevitable. ...read more.

Without Alfieri, it would take far longer for the audience to realise that Eddie is the main character in the play. Alfieri introduces us to Eddie at the end of his opening speech - "This one's name is Eddie Carbone, a longshoreman working the docks..."; he does not do this for any other character in the play. If he did not do this, it would be necessary for the audience to wait for the play to develop in order to learn who the main character is. The language Alfieri uses also enforces the fact that Eddie is the main character, by making him seem physically big, again, we can refer to the quote "His eyes were like tunnels..." The use of the word 'tunnel' to describe Eddie makes him seem physically large, bigger than the other characters in the play, therefore making Eddie the main character. As the play progresses, whenever Alfieri addresses the audience directly, he refers to Eddie less and less as 'Eddie' or 'Eddie Carbone', and more as simply 'him'. This influences the audience to view Eddie as the main character, a person that no longer requires an introduction. In conclusion, Alfieri is an integral part of the play - he directs the audience towards Eddie, he gives the play a structure, he is the vital connection between our culture and Sicilian culture, and the link between Sicilian 'justice' and American law. Without Alfieri, A View From the Bridge could not be understood. ?? ?? ?? ?? George Adje 10LT Page 1 of 3 12/07/2008 ...read more.