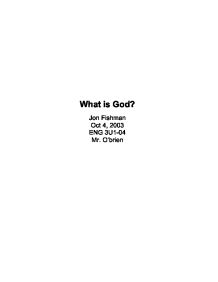 What is God? Jon Fishman Oct 4, 2003 ENG 3U1-04 Mr. O'brien "People see God every day, they just don't recognize him." -Pearl Bailey What determines the meaning of God? In religion, God is viewed as the originator and ruler of the universe. The origin of all life is believed to have begun from God. The Great Gatsby, by Francis Key Scott Fitzgerald, includes many themes, images and characters comparable to a God figure. The time period in which the novel is set, is a time of instability where the United States have just come out of the largest war to date. The "roaring 1920's" as they were known, was the start of prohibition, the post-war times, a time of racism and a time of confusion. The world of media and popular culture, the world of wealth and power, and the world of romantic love, all seem to be substitutes for God. The nineteen-twenties were a time where Americans were very dependant on religion and culture because of the violence around the world. ...read more.

Looking at modern times, the media and popular culture are even more like substitutes for God. Music artists such as Britney Spears and Justin Timberlake are like a God to the youth of the twenty-first century. The media and popular culture are so influential and have been for decades that they appear as substitutes for God. This fictional area of New York, East and West Egg, are home to many wealthy families and individuals. Nick Carraway, the narrator, first introduces West Egg to the reader when he mentions that he had moved there from the mid-west United States. Carraway moved to a large house beside Jay Gatsby's gothic mansion. West egg is known as the side of the "new rich" where all residences have recently become wealthy. The contrasting side, East Egg, is a place of sophisticated social connections. The wealth and power of the townspeople in the fictional New York town creates so much envy towards other people in East and West Egg that they are looked upon as role models. ...read more.

Buchanan is an extremely wealthy man who provides for his wife Daisy. The love between characters is so strong in many relationships that it convinces the reader to compare it to the strength of God. The many themes, images and characters expressed in The Great Gatsby act as substitutes for God. The world of media and popular culture, the world of wealth and power, and the world of romantic love are all, to some degree, substitutes for God, especially in the eyes of Fitzgerald. These three topics all appear throughout the novel and help the story become such a high caliber book. Some of the examples of how God is substituted in novel are clear; however other relationships between these topics and God are only recognizable when analyzing examples in the story. It is very difficult to analyze a topic that can have so many definitions such as God. But by making these comparisons through The Great Gatsby, one certainly gains not only a better understanding of what God means to them, but certainly a better understanding of the novel as a whole. 2 ...read more.