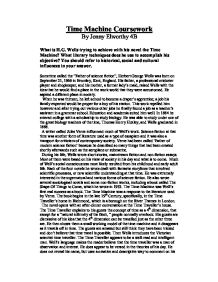 What is H.G. Wells trying to achieve with his novel the Time Machine? What literary techniques does he use to accomplish his objective? You should refer to historical, social and cultural influences in your answer.

Time Machine Coursework By Jonny Elworthy 4B What is H.G. Wells trying to achieve with his novel the Time Machine? What literary techniques does he use to accomplish his objective? You should refer to historical, social and cultural influences in your answer. Sometime called the "Father of science fiction", Herbert George Wells was born on September 21, 1866 in Bromley, Kent, England. His father, a professional cricketer player and shopkeeper, and his mother, a former lady's maid, raised Wells with the idea that he would find a place in the work world that they were accustomed. He aspired a different place in society. When he was thirteen, he left school to become a draper's apprentice; a job his family expected would be proper for a boy of his station. This work repelled him however and after trying out various other jobs he finally found a job as a teacher's assistant in a grammar school. Education and academia suited him well. In 1884 he entered college with a scholarship to study biology. He was able to study under one of the great biology teachers of the time, Thomas Henry Huxley, and Wells graduated in 1888. ...read more.

He seems to hold back on certain points when they are actually quite relevant leaving the reader in a state of confusion. As you can tell by the short passage above explaining the appearance of the Time Traveller. He seems to concentrate more on the characters feeling then their appearance showing that their appearance in this part of the book is not really necessary. In the first chapter of the book, Wells' main target is to introduce the characters. The Narrator is present throughout and is the only character that gives any recognition to the time traveller's claims. He appears to be seriously considering the chance of time travel. He seems to create a scenario of the world today. On one hand you have the people who believe in the concept (the time traveller), you have people who refuse to accept the idea (Filby), and you also have the people who wish to question both points of view (psychologist). Wells, I believe, tries to create a world situation in many of the events in the book. For example, when the time traveller goes to the very distant future, he discovers two types of descendants. ...read more.

Maybe this is because he wants people of society to think about the concept of time travel in more depth. People make up their own theories, just as Wells has done in this book. The Time Machine has two major themes. The first is that capitalism is dangerous and harmful to the workers (the Morlocks) and it is evident from the connection made out right from the Time Traveller that if life goes on like it did, it will be the fate of the world. The other theme is that mankind will continue to progress no matter what and improvements in society and cultures are a given thing. Wells had many ideas or visions himself about the concept of time travel. H.G Wells' literacy techniques had little or nothing in common with those of Jules Verne. When reading the book, people accepted the time machine as a literary device to give a form of probability. The book, the time machine is a fantasy. Wells tries to create that idea He was curious to know why things were like what they were. The Time Machine is a superb novel written with varied vocabulary and seems to leave Wells confused and he seems to be saying. Our World will be destroyed if we do not act in order to save it. ...read more.