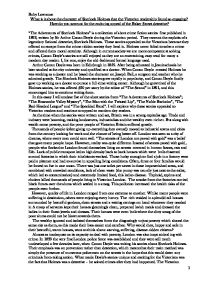 What is is about the character of Sherlock Holmes that a Victorian Readership found so endearing, and how can you account for his continuing success?

What is it about the character of Sherlock Holmes that the Victorian readership found so engaging? How do you account for the enduring appeal of the Baker Street detective? "The Adventures of Sherlock Holmes" is a collection of short crime fiction stories first published in 1892, written by Sir Arthur Conan Doyle during the Victorian period. They recount the exploits of a legendary fictional detective, Sherlock Holmes. These stories appealed to the Victorians because they offered an escape from the crime ridden society they lived in. Holmes never failed to solve a crime and offered them moral certainty. Although in current society we are more competent at solving crimes, Conan Doyle's stories are still enjoyed as they are an entertaining, easy read for many a modern day reader. I, for one, enjoy the old-fashioned formal language used. Arthur Conan Doyle was born in Edinburgh in 1859. After being educated in Jesuit schools he later studied at the city university and qualified as a doctor. When Conan Doyle created Holmes he was working as a doctor and he based the character on Joseph Bell, a surgeon and teacher who he admired greatly. The Sherlock Holmes stories grew rapidly in popularity, and Conan Doyle finally gave up working as a doctor to pursue a full-time writing career. Although he grew tired of the Holmes stories, he was offered �50 per story by the editor of "The Strand" in 1891, and this encouraged him to continue writing them. In this essay I will analyse five of the short stories from "The Adventures of Sherlock Holmes"; "The Boscombe Valley Mystery", "The Man with the Twisted Lip", "The Noble Bachelor", "The Red-Headed League" and "The Speckled Band". I will explore why these stories appealed to Victorian readers and continue to appeal to modern day readers. At the time when the stories were written and set, Britain was in a strong capitalist age. ...read more.

This is an example of how highly Watson respects Holmes, and how he underlines his good intentions and talent throughout the novel. Not only does Watson ensure that Holmes is always seen in a positive way, but he also plays the part of the reader, providing an understandable and believable "window" into the story. Watson is not as knowledgeable as Holmes and does not understand the complexities of a case; he is left in the dark for the majority of the story and enlightened at the end. He follows Holmes everywhere and is present for all the action of the plot. Through Watson, Conan Doyle has created the perfect eyes for the reader to look through - they are given all the clues of the mystery and are provided with a full explanation. The pace of the stories is slow, with a large amount of detail and description of crime scenes and objects. Conan Doyle did this to set the mood and feel of the story, and he wanted the reader to know exactly what was there and where. 'A brown chest of drawers stood in one corner, a narrow white-counterpaned bed in another, and a dressing-table on the left-hand side of the window. These articles, with two small wicker-work chairs, made up all the furniture in the room, save for a square of Wilton carpet in the centre.' The Speckled Band This helped give his stories a feel of accuracy and thoroughness, which appealed to the Victorian readership. The modern day reader would probably find this element of the stories exhaustive, being accustomed to more fast-paced plots. Because the stories were written over one hundred years ago, the language used appears old-fashioned and formal compared to that of modern day. Even Holmes and Watson, who are close friends, address each other with every formality. '"If you would have the great kindness to get rid of that Scottish friend of yours, I should be exceedingly glad to have a little talk with you."' ...read more.

John Clay, "' The Red Headed League Holmes changes the subject and makes out that his deeds were minimal, but it is clear he actually holds himself in very high esteem. He places himself in situations in which he can receive plenty of attention, and enjoys pretending to dislike it. A modern reader may find the character of Sherlock Homes unrealistic. His encyclopaedic knowledge and unwavering skills would seem clich�d in modern day society, and perhaps they are, but I think that Holmes set the clich� of the "unstoppable detective". He was the first, and Conan Doyle created something original and different. Although I find the long descriptions tedious and the predictable endings incredibly boring, Holmes does charm me. He is a character incomparable to any other - his eccentric habits and humour, intriguing mysteries and thoughts are loveable, even if they are out of place in today's world. I also think that most of the other detective characters we see today, on programs such as "CSI" and crime films like "D�j� vu", are simply recreations of Sherlock Holmes, albeit altered to fit into the advanced, technological and critical world we live in. They solve every crime, and have extensive knowledge, and although we hate to admit it, we really do wish they actually existed, even though we know it is probably not possible. In conclusion, I will say that although I enjoy very little about the stories, being interested in more challenging, thought-provoking literature, I find the character of Sherlock Holmes wonderfully creative and understand his enduring appeal. His charm, eccentricities and skill at crime-solving captivated the Victorians and still entertain readers today, because he is a truly unique character. Each of the stories I have analysed follow a structure that is predictable, but also satisfying and providing of moral reassurance. Conan Doyle's winning formula will continue to impress readers long into the future. We are yet to see a better fictional detective created through the pages of a book. ?? ?? ?? ?? Ruby Lawrence 1 ...read more.