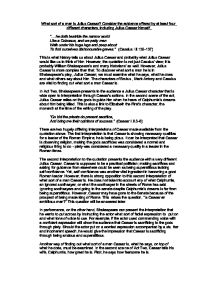 What sort of a man is Julius Caesar? Consider the evidence offered by at least four different characters, including Julius Caesar himself. "... he doth bestride the narrow world Like a Colossus, and we petty men Walk under his huge legs and peep about To find ourselves dishonourable graves." (Cassius I.ii.135-137) This is what history tells us about Julius Caesar and probably what Julius Caesar would like us to think of him. However, the quotation is not just Cassius' view; it is probably William Shakespeare's and many historians' as well. However, Julius Caesar is more complex than that. To discover what sort a man he is in Shakespeare's play, Julius Caesar, we must examine what he says, what he does and what others say about him. The characters of Brutus, Mark Antony and Cassius are vital to finding out what sort a man Caesar is. In Act Two, Shakespeare presents to the audience a Julius Caesar character that is wide open to interpretation through Caesar's actions. In the second scene of the act, Julius Caesar relies on the gods to guide him when he hears of Calphurnia's dreams about him being killed. This is also a link to Elizabeth the First's character, the monarch at the time of the writing of the play. ...read more.

Mark Antony, despite what the conspirators think, feels that Caesar is not at all ambitious because Caesar did not accept dictatorship of Rome, a republic, despite being offered three times. "I thrice presented him a kingly crown, Which he did thrice refuse. Was this ambition?" (Mark Antony III.ii.93-94) In the quotation above, we see how disgusting Antony finds the idea of Caesar being ambitious. The technique that he uses to tell the Roman citizens, and the audience watching, this is very crafty. First, he uses a rhetorical question to make his audience think seriously about whether Caesar really is an ambitious man. In the rhetorical question, "Was this ambition?" there is a strong flavour of irony which adds the effect which the rhetorical question itself creates. Combined with a change of voice and a serious facial expression, the actor in the role of Mark Antony will be able to put his point across to his audience effectively. In his last speech, in the fifth scene of Act Five, Mark Antony exposes and sums up to the audience what he thinks of Caesar in two lines. "This [Caesar's corpse] was the noblest Roman of them all. All the conspirators save only he Did that they did in envy of great Caesar." ...read more.

Overall, in the play, Julius Caesar, the characters of Brutus, Cassius, Mark Antony, Calphurnia, Caesar and Shakespeare, through Caesar's actions, have given the audience mixed views of Julius Caesar's character. Brutus shows Caesar as a dangerously power-hungry man; Cassius gives the impression that Caesar is a cowardly, weak leader, unfit to rule Rome. Mark Antony insists that Caesar is the greatest man ever and was certainly not ambitious whilst Caesar himself firmly believes himself to be a brave and fearsome. Shakespeare, through Caesar's actions portrays a character widely exposed to interpretation. Take the crown incident for example, did Caesar refuse the crown sincerely because he is not ambitious, or did he refuse the crown to make a hide his ambition away from the Roman public? Through the play, it is not Caesar's character that changes, it is the perceptions of him that change. The perceptions of Caesar change because of what the characters in the play say about him. Should the views of all the characters be combined, we get a Julius Caesar who is great, brave, fearless, fearsome but weak and arguably ambitious. By the end of the play, Shakespeare has led the audience to perceive Caesar, as history does, as a great man. I, like history and many after Caesar, see the lasting impression he has, a great leader of Rome who was wrongly killed. ...read more.