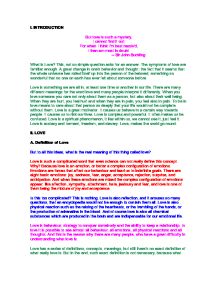 I. INTRODUCTION But love is such a mystery, I cannot find it out; For when I think I'm best resolv'd, I then am most in doubt. -- Sir John Suckling What is Love? This, not so simple question asks for an answer. The symptoms of love are familiar enough. A great change in one's behavior and thought; the fact that it seems that the whole universe has rolled itself up into the person of the beloved, something so wonderful that no one on earth has ever felt about someone before. Love is something we are all in, at least one time or another in our life. There are many different meanings for the word love and many people interpret it differently. When you love someone you care not only about them as a person, but also about their well being. When they are hurt, you feel hurt and when they are in pain, you feel also in pain. To be in love means to care about that person so deeply that your life would not be complete without them. Love is a great motivator. It causes us behave in a certain way towards people. It causes us to risk our lives. Love is complex and powerful. It often makes us be confused. Love is a spiritual phenomenon, it lies within us, we cannot see it, just feel it. Love is ecstasy and torment, freedom, and slavery. Love, makes the world go round. II. LOVE A. Definition of Love But to all this ideas, what is the real meaning of this thing called love? Love is such a complicated word that even science can not really define this concept. Why? Because love is an emotion, or better a complex configuration of emotions. Emotions are forces that affect our behaviour and lead us to indefinite goals. There are eight basic emotions: joy, sadness, fear, anger, acceptance, rejection, surprise, and anticipation. ...read more.

Each of these has its own meaning and its own rules. For example, shaking hands may mean that you agree with the other person; a small stroke in the back may mean a sign of support; a complete hug may mean that you love the person; the tied hands may mean compromise and a kiss may mean affection. But to these contacts there are social limits and they change in each culture depending on the traditions and customs of each one. V. PHYSICAL ATTRACTION Let's move to the physical attraction stage. The first time we see someone we pay special attention to his physical appearance, then as we meet him we start feeling attracted by his emotional part. But, why do we always fall in love, of a special type of person? What determines our attraction to them? Since first investigations, scientists concluded that sexual hormones were linked to the physical attraction. Early researches have found that people tend to discard those models that don't match with our parents' model. By this, men choose their partner by looking for their mother's aspects in the women they like. And women look for their father's aspects in the men they like. Many psychological studies show that most of the people choose a partner with a similar background and life. Being those who are totally the opposite to our lifestyle, the first ones that are discarded. We also look for someone who lives in the same city or country, someone of the same social status, and the same culture and sometimes religion. But more than physical attraction, there is the emotional attraction. Once we know the person we start loosing interest in their physical attraction and care more about his emotional part. It is known that important characteristics like kindness and intelligence are extremely important in the process of falling in love. Intelligence is important in all aspects of life, especially in love. ...read more.

This syndrome is more common in men. But, the truth is that he doesn't really love anybody. He just likes certain aspects of each woman. k) Slave love: the lover enjoys serving the other, even by extremely sacrificing him or herself, and losing dignity. l) Perverse love: it is also known as paraphilical love. Love goes against the social and moral rules. For example, love that can only be satisfied with elderly people. m) Delirious love: it is the tendency to believe that all men or women, in most of the cases famous people, are in love with me. n) Love with fusion: it is an uncontrollable love that produces a dissolution of the frontiers of one's ego and the partner's. Lovers end believing that they are both a single person. They live, suffer, enjoy, relate with others, as if they were just one person. These disorders are presented during relationships, but there are also other disorders proposed by Freud, that can be caused during childhood and adolescence. The most important are: o) Edipo's Complex: It is when the boy falls in love with her mother, and therefore, he sees his father as a competition and he has to fight to have all his mother's love and attention. This feeling should disappear in a natural way and the boy must realize that his relationship with his mother is different from his father's. But if this problem is not solved, then the boy discards his father's model and sees in his mother a new model. Due to this, the boy becomes homosexual in the future. p) Elektra's Complex: It is similar to the one before, but in this case, the girl falls in love with her father and sees her mother as a competition. This feeling should also disappear during time, but in the case it doesn't disappear the girl discards her mother's model and follows her father's model and she becomes a lesbian. All these disorders have a psychological cause and they can be diagnosed and sometimes healed by therapies with psychologists and psychiatrists. ...read more.