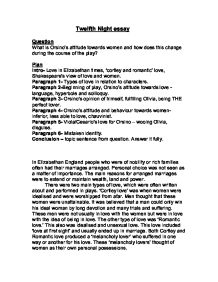 What is Orsino's attitude towards women and how does this change during the course of the play?

Twelfth Night essay Question What is Orsino's attitude towards women and how does this change during the course of the play? Plan Intro- Love in Elizabethan times, 'cortley and romantic' love, Shakespeare's view of love and women. Paragraph 1- Types of love in relation to characters. Paragraph 2-Beginning of play, Orsino's attitude towards love -language, hyperbole and soliloquy. Paragraph 3- Orsino's opinion of himself, fulfilling Olivia, being THE perfect lover. Paragraph 4- Orsino's attitude and behaviour towards women- inferior, less able to love, chauvinist. Paragraph 5- Viola/Cesario's love for Orsino - wooing Olivia, disguise. Paragraph 6- Mistaken identity. Conclusion - topic sentence from question. Answer it fully. In Elizabethan England people who were of nobility or rich families often had their marriages arranged. Personal choice was not seen as a matter of importance. The main reasons for arranged marriages were to extend or maintain wealth, land and power. There were two main types of love, which were often written about and performed in plays. 'Cortley love' was when women were idealised and were worshipped from afar. Men thought that these women were unattainable. It was believed that a man could only win his ideal woman by long devotion and many trials and suffering. These men were not usually in love with the women but were in love with the idea of being in love. The other type of love was 'Romantic love.' ...read more.

Orsino doesn't say if Olivia falls in love with him, he says when. Orsino believes it will only be a matter of time before Olivia returns his love. Orsino imagines that he would be the whole world to Olivia, he sees himself as her fulfilment in life. This seems extremely presumptuous. Another example of Orsino's opinion of himself is when he says that Viola/Cesario should remember him because he is the perfect example of a lover, 'Remember me; For such as I am, all true lovers are, Unstaid and skittish in all motions else, Save in the constant image of the creature that is belov'd.' Throughout the play Orsino sees himself as a victim of love. His desires are aggressive and he sees love as being hard and painful. Orsino presumes that women are inferior to men in every way possible especially when it comes to love. Orsino has a constant image in his mind that men are able to love more strongly than women. Orsino advises Viola/Cesario on the matter of love and tells her that women are only good lovers and partners if they are younger than the man. He also says that women don't stay beautiful for long, 'For women are as roses, whose fair flower, Being once display'd, doth fall that very hour.' Orsino reveals his real reason for loving Olivia to Viola/Cesario despite only knowing her for a short time. ...read more.

When Orsino found out that Viola/Cesario was a woman, he realises that she has loved him all along and was describing her love for him, 'Boy, thou hast said to me a thousand times, thou never shouldst love a woman like to me.' Orsino should now realise that women are not inferior to men and that they are able to love as strongly, but there is no reference in the text to show if he adopted this attitude. Orsino has accepted Viola/Cesario as a woman but he says he would like some more proof, 'He hath not told us of the captain yet.' Orsino says that when he gets his proof Viola/Cesario will be his wife. There is almost an echo of the hyperbole that Orsino used at the beginning of the play when he says, 'and his fancy's Queen.' The whole final scene is proof that Orsino was a melancholy lover and was in love with the idea of being in love rather than being in love with Olivia. We realise this because Orsino turns his attentions completely onto Viola/Cesario when he finds out Olivia is married to Sebastian and that Viola/Cesario is a woman disguised as a man. Orsino's attitude towards women doesn't really change because he just expects that Viola/Cesario will consent to be his wife. Orsino's attitude should change because he has seen the lengths that Viola/Cesario has gone to out of love for him. He should now have a lot of respect for women. ...read more.