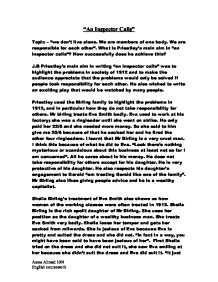 What is Priestley's main aim in 'An Inspector Calls'?

"An Inspector Calls" Topic - "we don't live alone. We are members of one body. We are responsible for each other". What is Priestley's main aim in "an inspector calls"? How successfully does he achieve this? J.B Priestley's main aim in writing "an inspector calls" was to highlight the problems in society of 1912 and to make the audience appreciate that the problems would only be solved if people took responsibility for each other. He also wished to write an exciting play that would be watched by many people. Priestley used the Birling family to highlight the problems in 1912, and in particular how they do not take responsibility for others. Mr birling treats Eva Smith badly. Eva used to work at his factory; she was a ringleader until she went on strike. He only paid her 22/6 and she needed more money. So she said to him give me 25/6 because of that he sacked her and he fired the other four ringleaders. I learnt that Mr Birling is a very cruel man. I think this because of what he did to Eva. "Look there's nothing mysterious or scandalous about this business at least not so far I am concerned". All he cares about is his money. He does not take responsibility for others except for his daughter. He is very protective of his daughter. ...read more.

She is a member of the Brumley women's charity "you are a member, a promit member of the Brumley women's charity". Mrs Birling is a very selfish woman. She is in her early 50s. She's stuck up and is also a snob. She has two children Sheila and Eric. Eva Smith went to Mrs Birling for help and Mrs Birling did not help her at all because she didn't believe a word Eva Smith said. Eva Smith told Mrs Birling that she is also called Mrs Birling "Eva Smith called her self Mrs Birling" She said this because Eva had an affair with Eric but Mrs Birling does not know this. Eva Smith had no family and was pregnant with Eric's baby. She went to Mrs Birling for help. Mrs Birling does not take responsibility for others. She thinks that Eva has her self to blame. Mrs Birling is a rich women and has a very high opinion of her self. This show us that that the problems in society in 1912 were really bad because some one like Eva Smith if they were poor and had no family people someone like Mrs Birling could treat them however they felt like. Sheila's brother, Eric, also contributed to Eva's downfall and further highlighted the problems many people faced in 1912. Eric Birling is a young foolish man who is 21 years old. ...read more.

The action keeps us guessing right until the last moment. We suspect one character, than another so that is why it is good. At the end of the play the inspector Goole just leaves and then after a while the Birling family get a phone call saying an inspector is on there way to their house. They then find out that inspector Goole was not real and they are glad. Priestley was very successful full in achieving his main aims. A lot of people watched the play and many have read the book "An Inspector Calls". I have read the book and it was very mysterious. Priestley wrote the play and made it very exciting so that we would want to real it all the way though to the end and we would also learn what the problems were like in society 1912. We learn that the problems in society 1912 were really bad, rich people could treat poor people how ever they wanted to. We also learn that in 1912 people did not take responsibility for each other. Priestley is showing us what it was like in 1912. The play was very mysterious because at the end the Birling family and we find out that inspector Goole was not real. Priestley is trying to say that if people took responsibility for each others things like what happened to Eva would not happen. ?? ?? ?? ?? Asma Ahmed 10N English coursework ...read more.