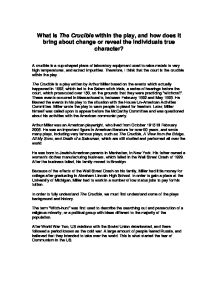 What is The Crucible within the play, and how does it bring about change or reveal the individuals true character?

What is The Crucible within the play, and how does it bring about change or reveal the individuals true character? A crucible is a cup-shaped piece of laboratory equipment used to raise metals to very high temperatures, and extract impurities. Therefore, I think that the court is the crucible within the play. The Crucible is a play written by Arthur Miller based on the events which actually happened in 1692, which led to the Salem witch trials, a series of hearings before the court, which prosecuted over 150, on the grounds that they were practicing "witchcraft". These events occurred in Massachusetts, between February 1692 and May 1693. He likened the events in his play to the situation with the House Un-American Activities Committee. Miller wrote the play to warn people to plead for freedom. Later, Miller himself was called upon to appear before the McCarthy Committee and was questioned about his activities with the American communist party. Arthur Miller was an American playwright, who lived from October 1915 till February 2005. He was an important figure in American literature for over 60 years, and wrote many plays, including very famous plays, such as The Crucible, A View from the Bridge, All My Sons, and Death of a Salesman, which are still studied and performed all over the world. ...read more.

In Proctors house, however, there is a cold atmosphere; Proctor has recently been discovered by his wife to be committing adultery with the maid, Abigail Williams. Proctor has ended the relationship, and begged his wife, Elizabeth, for forgiveness, but she has not yet pardoned him. This 'cold atmosphere' can most clearly be seen in the stage directions, "He gets up, goes to her, kisses her. She receives it. With a certain disappointment, he returns to the table". It is very clear what the director is trying to achieve. It is Abigail's frustration and sexual desire for Proctor that leads to the trials. Therefore, Proctor feels some responsibility for the events which occur. Proctor's true self begins reveal itself when he realises that the only way to prove that Abigail is lying is to confess to his sin. He confesses in Act Three, "It is a whore!" When he is asked to prove it he says "I have known her sir, I have know her" This is a crucial point in the play as it is where he forgets about his pride and his name, and does the right thing. However, this fails when Elizabeth is called in to testify, as she lies about what happened in order to save Proctor's name. ...read more.

The most valuable thing to him in his life is his reputation. He seems to not be capable of thinking outside the box; he follows rules to the book and does not stray from the laws. Strict adherence to the law seems one of his most important values. He believes that you are either with the court, or against it, and those who are against it are with the devil, "But you must understand, sir, that a person is either with this court or he must be counted against it, there be no road between." He is convinced that the children are speaking the truth, and that god is with them, "Do you know, Mr. Proctor, that the entire contention of the state in these trials is that the voice of Heaven is speaking through the children?" At the end of the play, he gives the impression that he knows that the children are lying, but will not admit it as it would undermine him, therefore he goes ahead with the hanging regardless, "Now hear me and beguile yourselves no more. I will not receive a single plea for pardon or postponement. Them that will not confess will hang. Twelve are already executed; the names these seven are given out, and the village expects to see them die this morning." In conclusion, I believe that the crucible, or Judge Danforth, does indeed bring about change in characters, and does reveal individuals in the play true selves. ...read more.