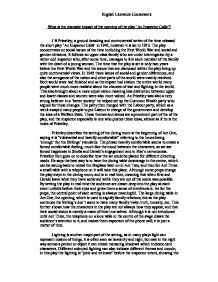 What is the dramatic impact of the opening of the play An Inspector Calls?

What is the dramatic impact of the opening of the play 'An Inspector Calls'? J B Priestley, a ground breaking and controversial writer of the time released the short play 'An Inspector Calls' in 1945, however it is set in 1912. The play concentrates on social issues of the time including the First World War and social and gender divisions. It follows an upper class family who are under interrogation by a rather odd inspector who, after some time, manages to link each member of the family with the death of a young woman. The time that the play is set is only two years before the First World War and the issues that are discussed within the play bring up quite controversial views. In 1945 these issues of social and gender differences, and also the arrogance of the nation and other parts of the world were mainly resolved. Both world wars had finished and as the impact had shaken the entire world many people were much more realistic about the chances of war and fighting in the world. This also brought about a more equal nation meaning less distinction between upper and lower classes and women were also more valued. As Priestley was also a very strong believer in a 'better society' he helped set up the Common Wealth party who argued for these changes. ...read more.

With all the characters and their traits there is some relation to the seven sins: Pride, envy, gluttony, sloth, anger, lust and greed. This is a theme in the play that plays on the audience's mind, much like other themes; this trait sticks with the character and later on the audience can see these more and more. However Sheila and Eric seem to lose these traits, showing their separation between Mr and Mrs Birling and Eric. This is because of Eric and Sheila's social responsibilities, and their realisation that what they did was wrong. The exit of Eric brings about an opportunity for Birling to talk to Gerald 'man-to-man' where he brings up the possibility of him being on "the next Honours List", which seems to impress Gerald. This, to Birling, is a very big occasion and even though it is not definite he feels he must tell Gerald, as his father is also a 'Sir'. This information is only exchanged with Gerald, as Birling is barely confident that he will receive a knighthood, he just wants to boast in front of his future son-in-law. When Eric re-enters Gerald and Birling are laughing but they do not share the joke with Eric, "Eric: What's the joke? Started telling stories? Birling: No.", they feel he is not man enough to be brought into the conversation they are having. ...read more.

The name Goole reminds us of a ghost, as in ghoul, and the phrase dues ex machine means god out of a machine, maybe the Inspector is the voice of God or that of Priestley. Either way the inspector comes in to completely change current events and disrupt the family to reveal their true selves. The foreshadowing and irony that the inspector brings to the play is also greatly relevant, when he says: "you seem to be a nice respectable family". The audience already know to some extent and later totally discover how untrue this is, another example of the unreliability of the family. The opening of the play aims to establish character and setting. It does this by simply describing each character we also discover how Birling is very arrogant and very narrow minded which is shown through his ridiculous assumptions. The Inspector is established as a very powerful and dominating character the reference to him and 'the light' is also in the opening. The major themes are also introduced, such as the class and gender division and the moral and social responsibilities that are also linked with the age of the characters. Priestley makes the opening of 'An Inspector Calls' very dramatic towards the end to draw and entice the audience to watch more. Priestley explores quite controversial issues of the time, and these issues make the audience interpret the character differently, showing how he uses the audience's personal experiences to influence their feelings towards the play. English Literature Coursework ...read more.