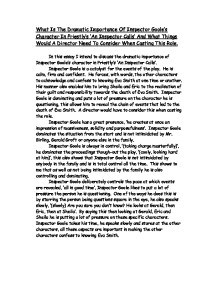 Are you sure you don't know? He looks at Gerald, then Eric, then at Sheila'. By saying this then looking at Gerald, Eric and Sheila he is putting a lot of pressure on these specific characters. Inspector Goole takes his time, he speaks slowly and stares at the other characters, all these aspects are important in making the other characters confess to knowing Eva Smith. Later in the play Inspector Goole's behaviour changes from being calm and cool to becoming threatening and aggressive. 'If your easy with me, I'm easy with you', therefore if your difficult and awkward with Inspector Goole he will be difficult and awkward with you. 'Don't stammer and yammer at me again, man. I'm losing all patience with you people.', this is another time in the play where we can see that Inspector Goole is not afraid or intimidated by Mr or Mrs Birling, at this point as well we can see that Inspector Goole is losing his temper. ...read more.

When a director is casting this role he would have to consider many aspects of Inspector Goole's character. The actor would have to make an impression of massiveness, thou he need not be a large man but neither should he be small and feeble looking, the actor needs to be cool and calm, he can't be nervous looking, he also needs to be able to strike fear into his fellow characters. If all the points are not met the character would not have the dramatic importance he should. I conclude that the dramatic importance of Inspector Goole's character is that his conduct, the way he can put fear and pressure on the character he is questioning, and his manner, he is not intimidated by Mr and Mrs Birling and Gerald Croft, is crucial in revealing the chain of events that led to the death of Eva Smith. The actor in this role would need to be able to illustrate this or the character will have less dramatic influence. ...read more.