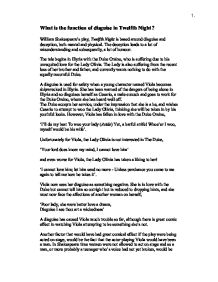 What is the function of disguise in Twelfth Night ?

What is the function of disguise in Twelfth Night ? William Shakespeare's play, Twelfth Night is based around disguise and deception, both mental and physical. The deception leads to a lot of misunderstanding and subsequently, a lot of humour. The tale begins in Illyria with the Duke Orsino, who is suffering due to his unrequited love for the Lady Olivia. The Lady is also suffering from the recent loss of her brother and father, and currently wants nothing to do with the equally mournful Duke. A disguise is used for safety when a young character named Viola becomes shipwrecked in Illyria. She has been warned of the dangers of being alone in Illyria and so disguises herself as Cesario, a male eunuch and goes to work for the Duke Orsino, whom she has heard well off. The Duke accepts her service, under the impression that she is a he, and wishes Cesario to attempt to woo the Lady Olivia, thinking she will be taken in by his youthful looks. However, Viola has fallen in love with the Duke Orsino, 'I'll do my best To woo your lady (Aside) ...read more.

He then goes on to wear a physical one that gets him into trouble because of an illusion that was created for him by some of the other characters. Here Marvolio uses clothes to become someone he is not. The eventual outcome is tragic for Marvolio but hilarious for the audience. . Marvolio is Olivia's Steward. A dignified person who thinks highly of himself but is considered a fool and killjoy by other members of Olivia's house. Marvolio, after coming across a late night party - 'My masters are you mad? Or what are you? Have you no wit, manners nor honesty, but to gabble like tinkers at this time of night? ...is there no respect of place, persons nor time, in you?' Because of his Puritanism, Marvolio is then subject to a prank by the Lady Olivia's Uncle Sir Toby Belch, Sir Andrew Aguecheek and the maid Maria. One day, when Marvolio is out in the gardens, heard to be talking to his shadow about his attributes and how the Lady Olivia might take a liking to him, he comes across a letter, written in Olivia's hand, proclaiming her love for him and her particular fancy to cross gartered yellow stockings. ...read more.

Malvolio is not a dignified puritan, nor is he a jovial and happy man. He is a vain and deluded fool. There is another character, Feste, a clown, who, although is dressed in the clothes of a clown and a fool, is really quite clever, and anything but a fool. Jesters needed to be clever, in order to say things that would amuse their hosts FESTE: Good madonna, why mourn'st thou? OLIVIA: Good Fool, for my brother's death. FESTE: I think his soul is in hell, madonna. OLIVIA: I know his soul is in heaven, fool. FESTE: The more fool, madonna, to mourn for your brother's soul, being in heaven. Take away the fool, gentlemen. The irony of the situation is that Feste, as you can see from this verse, is quite an intellect; in fools clothes, while Marvolio is a fool in the clothes of an intellect. This shows that clothes do not always show what type of person you are. The main plot in Twelfth Night is disguise. It was used to create the love triangle between Viola, Orsino and Olivia. The play uses disguise and deception to great comic effect, making it a truly exceptional piece. ...read more.