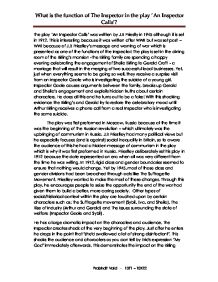 What is the function of The Inspector in the play An Inspector Calls?

The play 'An Inspector Calls' was written by J.B Priestly in 1945 although it is set in 1912. This is interesting because it was written after WWII but was set post - WWI because of J.B Priestley's message and warning of war which is presented as one of the functions of the Inspector! The play is set in the dining room of the Birling's mansion -The Birling family are spending a happy evening celebrating the engagement of Sheila Birling to Gerald Croft - a marriage that will result in the merging of two successful local businesses. Yet, just when everything seems to be going so well, they receive a surprise visit from an Inspector Goole who is investigating the suicide of a young girl. Inspector Goole causes arguments between the family, breaks up Gerald and Sheila's engagement and exploits hidden truths about certain characters. He does all this and he turns out to be a fake! With this shocking evidence the Birling's and Gerald try to restore the celebratory mood until Arthur Birling receives a phone call from a real Inspector who is investigating the same suicide. The play was first preformed in Moscow, Russia because at the time it was the beginning of The Russian revolution - which ultimately was the upbringing of communism in Russia. ...read more.

"We are members of one body" which symbolises Priestley's socialist views on society. "If men will not learn that lesson, then they will be taught in fire, blood and anguish" this conveys the message that if people don't co-operate then there will be another war and many will die and this point will go to the audience and make them take home that point as the play was first performed just after World War Two. In conclusion, the inspector played a big part in peoples lives and that the play has many messages to it. For example, one message of the play could be "don't judge the book by its cover" as every one in the play thought the inspector was real and they released information but the fact is he was a fake and they didn't find out until Gerald came back and told them. Another message could be "careless actions can affect peoples lives" as Sheila got Eva fired from her job because she was in a bad mood this impacted Eva's life and was the beginning of her life falling apart. Priestley was a socialist and thought that every one should be equal so he could have made the play to symbolise what happens when people are not equal and that peoples lives get ruined when they are not as well-off as others. ?? ?? ?? ?? What is the function of The Inspector in the play 'An Inspector Calls'? Prabhdit Vaid - 10T1 - 10XE2 ...read more.