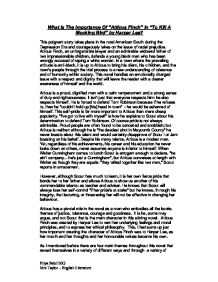 What Is The Importance Of &quot;Atticus Finch&quot; in &quot;To Kill A Mocking Bird&quot; by Harper Lee?

What Is The Importance Of "Atticus Finch" in "To Kill A Mocking Bird" by Harper Lee? This poignant story takes place in the rural American South during the Depression Era and courageously takes on the issue of racial prejudice. Atticus Finch, an unforgettable lawyer and an admirable widowed father of two impressionable children, defends a young black man who has been wrongly accused of raping a white woman. In a town where the prevailing attitude is anti-black, it is up to Atticus to bring his client, his children, and the town's people through the trial process to a new understanding of tolerance and of humanity within society. This novel handles an emotionally charged issue with a respect and dignity that will leave the reader with a clearer awareness of himself and the world. Atticus is a proud, dignified man with a calm temperament and a strong sense of duty and righteousness. It isn't just that everyone respects him: he also respects himself. He is forced to defend Tom Robinson because if he refuses to, then he "couldn't hold up [his] head in town" - he would be ashamed of himself. This self-pride is far more important to Atticus than mere cheap popularity. ...read more.

One of the more important incidents where this quality contained in Atticus is brought to light is in the trial scene. The setting is Maycomb County Courthouse, a relatively modest, inoffensive building, where again the "anti-black" emotion is felt in strong currents. This is portrayed to the reader through the seating arrangement in the courthouse. The reader must remember that Maycomb is a comparatively small county, where many trials do not occur at all, let alone cases on as serious a scale as this, the case of rape, especially that of a black man allegedly raping a white woman, whether she be "white trash", or not, so this caused rather a stir in society as town trials in the 1930s were seen as immense social events. This "out of the ordinary" case was treated rather like a "Carnival" according to Miss Maudie, the Finch's neighbour. By not attending the trial she was showing her support for Atticus, just as Scout did, but in a way that Scout did not understand. Miss Maudie referred to the crowds gathering outside the courthouse as a "Carnival" because with such an enormous swarm of people things would be crowded, atmospheres intense, hot, and sticky, and seating scarce. ...read more.

He elucidates to her; " A mob's always made up of people, no matter what. Mr Cunningham was part of a mob last night, but he was still a man." And, as if to make sure that the message had really sunk in, he dictates it again, but in such a matter that he knows his young children will surely understand. He quips; "That proves something, a gang of wild animals can be stopped, simply because they're still human." We see again that Atticus is emphasising to his children the lesson of not judging, nor hating someone forever, just because of a mistake that they may have committed, or and opinion they was have stressed. Atticus realises that sometimes people get led astray from what is right and true, and so, maybe this is why Harper Lee always conveys Atticus Finch to us alone in his cause, never as a part of a group or mob. This is telling the reader that he does not seem to need other people to back up his opinions and beliefs. We see this so often in the novel that one may actually wonder if it is this quality in Atticus that is a mirror copy of Harper Lee's own belief. Priya Patel 10G Mrs Taylor - English Literature ...read more.

This is a well written and well expressed essay that covers many apt points about the character of Atticus Finch. There is a good understanding of his role demonstrated; however there needs to be more support used to justify the points being made.