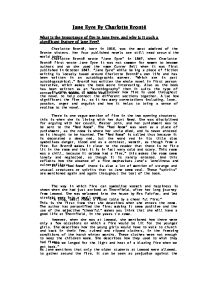 What is the importance of fire in Jane Eyre, and why is it such a significant feature of Jane Eyre?

Jane Eyre By Charlotte Bront� What is the importance of fire in Jane Eyre, and why is it such a significant feature of Jane Eyre? Charlotte Bront�, born in 1816, was the most admired of the Bronte sisters. Her four published novels are still read around the world today. Charlotte Bront� wrote "Jane Eyre" in 1847, when Charlotte Bront� first wrote Jane Eyre it was not common for women to become authors and so she used the name Currer Bell when it was first published in October 1847. "Jane Eyre" while being a piece of fiction writing is loosely based around Charlotte Bront�'s own life and has been written in an autobiographic manner. "Which are in part autobiographical," Bront� has written the whole novel in first person narrative, which makes the book more interesting. Also as the book has been written as an "autobiography" then it suits the type of context and it makes it sound real. In this essay, I want to discover how fire is used throughout the novel to help connect the different sections together. Also how significant the fire is, as it has many connotations including, love, passion, anger and anguish and how it helps to bring a sense of realism to the novel. There is one vague mention of fire in the two opening chapters; this is when she is living with her Aunt Reed. She was disciplined for arguing with her cousin, Master John, and her punishment was to be sent to the "Red Room". ...read more.

The first is when Bertha Mason, sets fire to Mr Rochester's room. This is almost what I would consider a warning to Mr Rochester that he will have to come clean about his wife, before his relationship with Jane can go anywhere. When Charlotte Bront� describes the fire she writes: "Tongues of flame darted around the room," this gives you the impression that the fire is in fact a spirit, very much like the one that was mentioned I the "Red Room". This fire has a great impact on the storyline. On the night of the fire, Jane Eyre saves Mr Rochester from almost certain death, and so Mr Rochester believes that he is now indebted to her. To the reader, this seems like he is becoming closer to Jane and he has feelings for her, that before he didn't have. And thus their association becomes stronger and their relationship also develops, into slightly more than friendship. This is also an unusual event as; the gender roles have changed as Jane has saved Rochester's life. "You have saved my life" At this time in history though, it was unusual for a girl of a lower class, to marry someone who was in a higher class, as it was thought that classes could not be mixed. This was mainly because those in the higher classes thought that the lower classes were only marrying for money and status, and not for love. ...read more.

Likewise with Mr Rochester he needed a dramatic event to show him just how much he needed Jane, so that he could live on. Throughout the book, fire has been mentioned on many occasions, and it seems that by using fire, as the reason that Jane and Rochester can now be together, is a good way of summing up everything, that fire has played apart in. The theory that fire has control over the story, and that without it, nothing would be possible, is a very convincing method, of creating fire to become personified. Personification of fire is used over and over again in the book, and there are several links, that connect the "Red Room" of her aunt's home, to her new home of "Thornfield Hall" and the fires that occur here. Generally I believe that fire plays a very important role, in controlling what the characters do in "Jane Eyre". Without fire it is unlikely that Rochester and Jane would have become married. It acts as link between the different sections of the book, and it acts as a sign, of love and danger/despair, two completely different aspects of emotion. As well as being seen as fire, it is also there as a spirit that is present with Jane Eyre throughout the book, as though it is her guardian, watching out for her, making sure she doesn't make a silly mistake, with her life. In the end fire can be seen as "holding the story together" without it, Charlotte Bront� would have been unable to link the story together in the effective way that she achieved. ...read more.