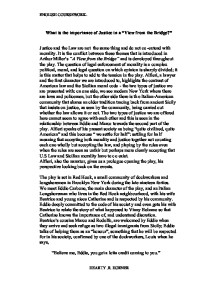 What is the importance of Justice in a "View from the Bridge?" Justice and the Law are not the same thing and do not co-extend with morality. It is the conflict between these themes that is introduced in Arthur Miller's "A View from the Bridge" and is developed throughout the play. The question of legal enforcement of morality is a complex political, moral, and legal question on which opinion is sharply divided; it is this matter that helps to add to the tension in the play. Alfieri, a lawyer and the first character we are introduced to, highlights the contrast of American law and the Sicilian moral code - the two types of justice we are presented with: on one side, we see modern New York where there are laws and policemen, but the other side there is the Italian-American community that shares an older tradition tracing back from ancient Sicily that insists on justice, as seen by the community, being carried out whether the law allows it or not. The two types of justice we are offered here cannot seem to agree with each other and this is seen in the relationship between Eddie and Marco towards the second part of the play. ...read more.

Alfieri however, can see the situation objectively, observing that Eddie does not realise the mistake he would be making if he did betray the brothers to the immigration. The mistake being the fact that he would betray the brothers and bring the dishonour upon himself. Alfieri tries to tell Eddie that he has to let Catherine go... "Yes, but these things have to end, Eddie thats all. The child has to grow up and go away, and the man has to learn to forget. Because after all, Eddie-what other way can it end? Let her go." After Eddie has left Alfieri, the audience is given an insight into Alfieri's thoughts. Alfieri, through his speech to the audience on page thirty five, knows already what will happen. Alfieri predicts that something bad will happen in Eddie's situation but reveals to the audience he is concerned that there is nothing he can do about it although he "...could see every step coming, step after step, like a dark figure walking down a hall toward a certain door." Eddie is still frustrated that the law cannot do anything about Rodolfo marrying Catherine for what he assumes is only citizenship (though he has no proof of it). ...read more.

Marco is also demanding justice but quotes that he "don't understand this country" when he cannot take into view that Eddie has done nothing wrong according to the law by betraying them. The situation here being that Eddie has betrayed them according to Sicilian morality but he obeys the U.S law by handing them over a illegal immigrants which then brings about the conflict. We know that his betrayal is immoral but unfortunately Marco sees only that viewpoint of the situation, he refers back to the Sicilian code of honour when he tells Alfieri; "In my country he would be dead now. He would not live this long." Marco seeks his revenge for Eddie's betrayal but is told by Alfieri that it is not right to do it as he sees fit. Alfieri's attempts to explain the law to Marco (and Eddie) have failed totally and it is partly this that has conducted the way to further misunderstandings. Both men demanding their individual needs for justice cannot compromise and so it has encouraged the conflict brought about in this play. Ultimately justice is evidently the main theme of the play and it is extremely important but it is just that there are different types of justice. ?? ?? ?? ?? ENGLISH COURSEWORK- HEARTY .R. HORNER ...read more.