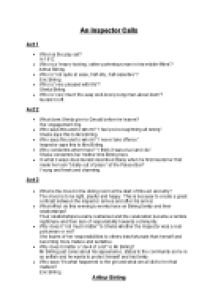 What is the importance of Mr. Arthur Birling as a character in the play in the play An Inspector Calls?

﻿An Inspector Calls Act 1 1. When is the play set? In 1912. 1. Who is a ?heavy-looking, rather portentous man in his middle fifties?? Arthur Birling. 1. Who is ?not quite at ease, half-shy, half-assertive?? Eric Birling. 1. Who is ?very pleased with life?? Sheila Birling. 1. Who is ?very much the easy well-bred young man-about-town?? Gerald Croft. Act 2 1. What does Sheila give to Gerald before he leaves? Her engagement ring. 1. Who says this and to whom? ?I feel you?re beginning all wrong?. Sheila says this to Mrs Birling. 1. Who says this and to whom? ?I never take offence?. Inspector says this to Mrs Birling. 1. Who condemns whom here? ?I think it was cruel and vile?. Sheila condemns her mother Mrs Birling here. 1. In what 3 ways does Gerald described Daisy when he first meets her that made her look ?totally out of place? at the Palace Bar? Young and fresh and charming. Act 3 1. What is the mood in the dining room at the start of this act and why? The mood is to be light, playful and happy. ...read more.

The deliberate way that JB Priestley makes Mr Birling reel out mistake after mistake is building an idea of an arrogant, middle class man who could easily represent a lot of the society that Priestley was living in at the time. A normal detective story can often build up a character showing him/her to be arrogant and pompous like Mr Birling, but it is the specific incidents that he mentions that is the first indicator that this play is more than a petty mystery. Birling proudly boasts that his friend will travel on the "absolutely unsinkable" Titanic, that he knows for a fact that "there isn't a chance of war" and that in the near future there will be "peace and prosperity ... everywhere." Of course Mr Birling could not have been more wrong, within two years after his futuristic speech the most devastating war ever broke out affecting the whole world and the indestructible Titanic sank to its death in the Atlantic along with the majority of its passengers. Of course, as the play was written and shown in 1945 all of this would be clear to the audience. ...read more.

He mentions to Gerald how he can see that Lady Croft thinks he can do better, and is anxious to impress with the mention of a knighthood. He also seems to be trying to show himself as upper class in the fact that he even buys the same port as Sir George Croft. The first part of act one and the happiness of Mr Birling is concluded with his speech to Gerald and Eric, ?a man has to mind his own business and look after himself and his own?. The happy atmosphere of the beginning of the play comes to an abrupt stop with the arrival of the inspector. Mr Birling sees nothing special about this visit at first, and expects the inspector to behave according to the rules of his own society. He tries to win the inspector to his side in this way by offering him port and trying to intimidate him with talk of having been a mayor, playing golf with the Chief constable and introducing Gerald as of Crofts Limited. The fact that Mr Birling lives in this world of business and upper class rules mean that he soon begins to dislike the inspector when he refuses to abide, or even care for these rules. By Zarin Tasneem 9x3 ...read more.