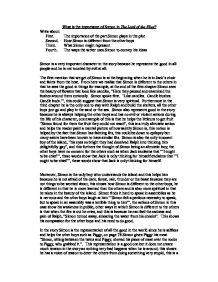 What is the importance of Simon in The Lord of the Flies?

What is the importance of Simon in The Lord of the Flies? Write about: First. The importance of the part Simon plays in the plot Second. How Simon is different from the other boys Third. What Simon might represent Fourth. The ways the writer uses Simon to convey his ideas Simon is a very important character in the story because he represents the good in all people and he is not touched by evil at all. The first mention that we get of Simon is at the beginning when he is in Jack's choir and faints from the heat. From here we realise that Simon is different to the others in that he sees the good in things for example, at the end of the first chapter Simon sees the beauty of flowers that look like candles, "Here they paused and examined the bushes around them curiously. Simon spoke first. 'Like candles. Candle bushes. Candle buds.'", this could suggest that Simon is very spiritual. Furthermore in the third chapter he is the only one to stay with Ralph and build the shelters, all the other boys just go and play in the sand or the sea. ...read more.

Moreover, Simon is the only boy who understands the island and this helps him because he is not afraid of the dark, forest, rain, thunder or the beast because they are not things to be worried about, this shows how Simon is different to the other boys, he is different in that he is more learned than the others and is also more spiritual in that he takes in the beauty of the island. Simon finds it hard to speak in assemblies as he is nervous and the other boys laugh at him "'Simon felt a perilous necessity to speak, but to speak in an assembly was a terrible thing to him'", the actions of Simon in this case show his weakness in public, other ways in which Simon is different to the others is that when the fire is out he cries, and this is because he can feel the sadness and pain of Ralph, "Simon turned away, smearing the water from his cheeks". This shows his compassion for the other boys and his need to do good. ...read more.

When Simon is confronted with The Lord of The Flies he has a vision which makes sense of the beast and of the island, "'you knew didn't you? I'm a part of you?'" says The Lord of The Flies, these words are a revelation that the beast is not a real thing but is the boy's own fear and evil that is driving their bloodthirsty, loveless regime that will devour the island in a spontaneous ball of hatred and flames. The ways that Simon is conveyed are that he is full of life and that he is quite small but he has great spirit and he knows how to survive. I think that Golding uses Simon to show that he thinks that the human race has many evil people and many who can succumb to evil easily but there are some who are untouched by evil and need not be tempted by the wiles of evil and jealousy. I think that Simon is an integral part of the story and is the only boy who is totally pure of spirit and mind. He is also a very special boy whose death will cause a cataclysmic turn of events resulting in the destruction of everyone and everything on the island. ...read more.

This essay has evidence of a good, brief plan. The plan is a good idea if candidates can keep it simple, but not no simple that when, in the middle of the essay they come to refer to it and ...

This essay has evidence of a good, brief plan. The plan is a good idea if candidates can keep it simple, but not no simple that when, in the middle of the essay they come to refer to it and it makes no sense. But they must also be aware not to spend more the a couple of minutes on it otherwise it will eat away at valuable exam time - any pre-planning notes that are not written in essay form are not marked. The Response to the Question here is fairly good, with some good analysis shown in how Simon is considered important. The candidate has identified a number of scenes where his characteristics are shown that back up their comments about him, though further understanding of his role within the thematic element of the novel could have been displayed.

The Level of Analysis here is good. It doesn't cover everything, and neglects to consider in detail Simon's importance as a motif as well as a character, and further analysis of the effect of Simon's death could be written about. Nonetheless, this candidate has explained Simon's function in the plot of the novel well, noting that he is an altruistic character who is devoted to the harmonious co-existence of the boys and the island, and when he is killed it becomes obvious that the boys will descend into primitive, animalistic behaviour.
The candidate also notes connotative message Golding sends us in Simon's character, albeit very briefly, with little explanation. The alikening him to a Saint would've been far more insightful had the connection not been established on Simon's tendency to faint. If, indeed, this is a genuine link, then evidence that "many saints have been known to have similar fits" must be provided, otherwise it becomes a rather nonsensical comment with no factual basis. The explanation of Simon's fits is that he cannot adapt to lifeon the island well - he does not belong there. He exists harmiously with it regardless, but his faintings foreshadow his own death - the island kills him. Higher ability candidates may make this connection as it is the island and the fear of the island that manipulates the boys' behaviour into spiralling to a primitive state, and they in turn kill him. In other words, the searing heat of the island cause Simon to faint regularly and therefore forshadows his death when it manipulates the other boys into becoming savages.
It is not till the last two paragraphs that the candidates response shows signs of someone able to gain far higher than a high C grade. Rounding off nicely the conclusion of Simon's importance help giev the examiner a good clear view of the candidates' abilty to summarise their thoughts - in many regards, this is the most important part of the essay for candidates who have many ideas to write about in the explanatory and evaluative paragraphs.

The Quality of Written Communication is fair. There are moment where whole phrases are repeated, and also moments where grammatical errors like comma splice and a misuse of commas and full-stops, but the analysis is still readable and the meaning unambiguous.