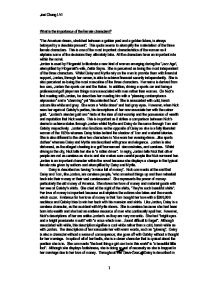 What is the importance of the female characters - Jordan is used by Fitzgerald to illustrate a new kind of women emerging during the &quot;Jazz Age&quot;, exemplified by Fitzgerald's wife, Zelda Sayre.

What is the importance of the female characters? "The American dream, stretched between a golden past and a golden future, is always betrayed by a desolate present". This quote seems to exemplify the materialism of the three female characters. This is one of the most important characteristics of the women as it explains some of the decisions they ultimately take. All the characters have an important role within the novel. Jordan is used by Fitzgerald to illustrate a new kind of women emerging during the "Jazz Age", exemplified by Fitzgerald's wife, Zelda Sayre. She is perceived as being the most independent of the three characters. Whilst Daisy and Myrtle rely on the men to provide them with financial support, Jordan, through her career, is able to achieve financial security independently. She is also perceived as being the most masculine of the three characters. Her name is derived from two cars, Jordan the sports car and the Baker. In addition, driving a sports car and being a professional golf player are things more associated with men rather than women. ...read more.

Nick comments at the end that Daisy and Tom, like Jordan, are careless people, "who smashed things up and then retreated back into their money or their vast carelessness". She represents the power of money-particularly the old money of America. She shows her love of money and material goods with her awe at Gatsby's shirts. She cried at the sight of the shirts, "They're such beautiful shirts". Her love of money is important because as it explains the actions she takes and the events which occur. Evidence for her love of money is that Tom bought her love with a $300,000 necklace and Gatsby tries to win her back with his mansion and shirts. Like Jordan, Daisy is a careless character, as the accident with Myrtle shows. She is careless because she had been born into wealth and she had an endless resource of men who continually spoil her. However, Nick's descriptions of her are unlike Jordan's as they are very romantic. She had "bright eyes and a bright passionate mouth" with "a voice which men...found difficult to forget". ...read more.

Fitzgerald portrays Myrtle as someone who is preoccupied with material things and driven by consumerism. "She lets four taxicabs drive away before she selects a new one". Tom provides her with her material cravings, which George fails to do. Her purchases and the frequent changing of her clothes when she arrives in New York show her material desires. Myrtle is an important character in the novel as she echoes a main theme. Gatsby reinvents himself several times to please and win Daisy over. In a way, Myrtle also reinvents herself frequently to try to please Tom, but on a smaller scale. In comparing Myrtle and Daisy, it is obvious that the two were bought up in different worlds. Daisy was born into a world of wealth but Myrtle did not find material happiness until she met Tom. However, both characters display naivety and selfishness. Whilst on the outside, the three characters may not be identical; one characteristic that links them altogether. They are all careless and spoilt. They people around them adjust to their actions in order to make them feel comfortable, hence making them important and central characters. ...read more.