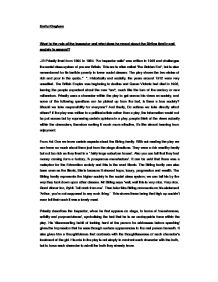 What is the role of the Inspector and what does he reveal about the Birling family and society in general?

Emily Kingham What is the role of the Inspector and what does he reveal about the Birling family and society in general? J.B Priestly lived from 1894 to 1984. "An Inspector calls" was written in 1945 and challenges the social class system of pre-war Britain. This era is often called "the Golden Era", but is also remembered for its terrible poverty in lower social classes. The play shows the two states of rich and poor in the quote.." ". Historically and socially, the years around 1912 were very unsettled. The British Empire was beginning to decline and Queen Victoria had died in 1902, leaving the people expectant about the new "era"; much like the turn of the century or new millennium. Priestly uses a character within the play to get across his views on society, and some of the following questions can be picked up from the text, Is there a true society? Should we take responsibility for everyone? And finally, Do actions we take directly affect others? If the play was written in a political article rather than a play, the information would not be put across but by expressing certain opinions in a play, people think of the views actually within the characters, therefore making it much more effective, it's like almost learning from enjoyment. From Act One we know certain aspects about the Birling family. With out reading the play we can know so much about them just from the stage directions. They were a rich wealthy family but not too rich as they lived in a ' fairly large suburban house'. Also you can tell that they had money coming form a factory..'A prosperous manufacture'. It can be said that there was a metaphor for the Edwardian society and this is the word titanic. The Birling family can also been seen as the titanic, this is because it showed hope, luxury, progression and wealth. ...read more.

This is hypocritical because, as the Inspector says, 'the girl's [still] dead, though'. It is known that Birling sacked the girl because she was rude and wanted a pay rise. He thought (as an upper class citizen) this was very rude coming from a slave girl. Next the Inspector moves on to Mr. Birlings daughter, Sheila. Her involvement with the death was similar to her fathers. One day, whilst shopping in a very expensive dress shop, Eva Smith laughed at her trying on one particular dress. Sheila, of course, was very mad and ordered at once that this girl was fired, and so it was. Once she realises what she has done, she quotes 'so I'm really responsible?' She blames herself for the death and regrets every move she did, but the Inspector says that won't help, Eva is dead. From the start Sheila has come across as a young, pretty and sensitive girl. She had a lack of understanding of the outside world, so the death came across as a shock. Like Birling, she readily admits to having met the girl. But her father admits this because he is unable to see that he has done anything wrong; Sheila, on the other hand, admits this because she is genuinely 'ashamed' and is 'trying to tell the truth'. Of all the characters, hers is the only confession that does her credit - Mrs Birling is first obstructive then defiant, and Gerald and Eric both confess at a point when they know they have been already found out. She is guilty of the sins of pride and envy - she complained about the girl because she thought she was laughing at her, and because 'she was a very pretty girl too... I couldn't be sorry for her'. Although she asks 'how could I know what would happen afterwards', she does not try to escape from the blame. ...read more.

I think this may have helped her along in life a bit because just before than she was sacked from her second job, it was her only hope, but being sacked pushed her towards the only option...Prostitution.The Inspector says that she had kept a sort of diary, which helped him piece together the last two years of her life: However, in Act III we begin to wonder whether Eva ever really existed. - Gerald says, "We've no proof it was the same photograph and therefore no proof it was the same girl. - Birling adds, "There wasn't the slightest proof that this Daisy Renton really was Eva Smith. Yet the final phone call, announcing that a police inspector is shortly to arrive at the Birlings' house to investigate the suicide of a young girl, makes us realise that maybe Eva Smith did exist after all. I think she could represent the devil as she causes trouble in everyone's life, it's almost as though she meant to do everything she did do. However, Think about Eva's name. Eva is similar to Eve, the first woman created by God in the Bible. Smith is the most common English surname. So, Eva Smith could represent every woman of her class. Gerald's final service in the play is to reveal that Goole was not a real Inspector. He also carefully proves that Goole may not have shown everyone the same photograph, and it is he who takes the initiative in phoning the Infirmary to check whether a girl has actually died. His reaction is not 'triumphant' (which is Birling's), but he is described as 'smiling', and he says that 'everything's all right now'. The 'Whodunnit' genre contributes towards the effect of the play but creating a great sense of mystery, urging the reader to read to find out who did it. The policeman in a 'whodunnit' has a big role to play as he uncovers untold secrets; he is like the chairman of a debate. This is used in the play because is not sided towards one person, but uncovers all of their guilt. ...read more.