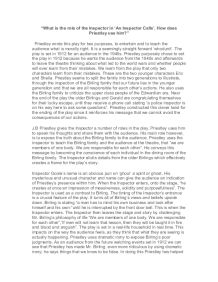 What is the role of the Inspector in An Inspector Calls. How does Priestley use him?

"What is the role of the Inspector in 'An Inspector Calls'. How does Priestley use him?" Priestley wrote this play for two purposes, to entertain and to teach the audience what is morally right. It is a seemingly straight forward 'whodunit'. The play is set in 1912 for an audience in the 1940s. Priestley purposely chose to set the play in 1912 because he wants the audience from the 1940s and afterwards to leave the theatre thinking about what led to the world wars and whether people will ever learn from their mistakes. We learn from the play that only two characters learn from their mistakes. These are the two younger characters Eric and Sheila. Priestley seems to split the family into two generations to illustrate, through the inspection of the Birling family that our future lies in the younger generation and that we are all responsible for each other's actions. He also uses the Birling family to criticize the upper class people of the Edwardian era. Near the end of the play the older Birlings and Gerald are congratulating themselves for their lucky escape, until they receive a phone call stating "a police inspector is on his way here to ask some questions". ...read more.

To show the differences between the attitudes of the social classes Priestley uses dialogue. Birling, being an arrogant and stubborn character, tries to defend himself against, what he thinks to be a public scandal, "Rubbish! If you don't come down sharply on some of these people, they'd soon be asking for the Earth". The Inspector replies "But after all it's better to ask for the earth than to take it". The two older Birlings have very different points of view about the social classes, compared to their children. Mr. Birling speaks to Eva in an impolite manner, simply due to the class that she is born into, he tells her to "clear out". Mrs. Birling is also prejudiced against people of Eva's class, "She was claiming elaborate fine feelings and scruples that were simply absurd in a girl in her position". Mrs. Birling thinks that only people with money and power deserve scruples, unlike Eva Smith. Sheila and Eric change through the night and begin to realise what they have done and how this has affected a poor young lady. Sheila is willing to "help her know". She almost instantly learns from her mistake "I'll never, never do it again to anybody". ...read more.

The Inspector changes a couple of characters in the play, however does he mange to change the audience? The Inspector is vital for the play, without him the play could not happen. The play describes the life story of Eva Smith; the Inspector provides the entire framework for this story by introducing all the stages and outcomes of these in her life. He elicits the information from the Birlings with some persuasion and even force, since Mr. and Mrs. Birling are reluctant to 'confess' their roles in Eva Smith's tragic death. This produces all the detail of the play. The Inspector speaks with great moral authority, cutting short, interrupting and challenging people. The Inspector wants Birling to 'confess', "I'm not going until I know all that happened". He controls the situation throughout, to the extent that he decides who will speak and when; who may or may not leave; who will or will not see the photograph "the Inspector interposes himself between them and the photograph". Priestley shows the Inspector's dominance, during much of the Inspector's conversation, "I'll explain why when you've answered my questions, Mrs. Birling". He seems to have the power to make all the characters speak only when and what he wants them to. "Come along, Mr. Croft. What happened? ...read more.