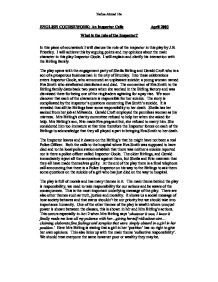 What is the role of the Inspector?

ENGLISH COURSEWORK: An Inspector Calls April 2003 What is the role of the Inspector? In this piece of coursework I will discuss the role of the inspector in this play by J.B. Priestley. I will achieve this by arguing points and my opinions about the main character in this play Inspector Goole. I will explain and clarify his interaction with the Birling family. The play opens with the engagement party of Sheila Birling and Gerald Croft who is a son of a prosperous businessman in the city of Brumley. Into these celebrations enters Inspector Goole, who announced an unpleasant suicide: a young woman named Eva Smith who swallowed disinfectant and died. The connection of Eva Smith to the Birling family dates back two years when she worked in the Birling factory and was dismissed there for being one of the ringleaders agitating for a pay rise. We soon discover that each of the characters is responsible for her suicide. The story is complicated by the inspector's questions concerning Eva Smith's suicide. It is revealed that all the Birlings bear some responsibility to her death. Sheila has her sacked from her job at Milwards. Gerald Croft employed the penniless woman as his mistress. Mrs Birling's charity committee refused to help her when she asked for help. Mrs Birling's son, Eric made Eva pregnant but, she refused to marry him. She considered him too immature at that time therefore the Inspector forces on each of the Birlings to acknowledge that they all played a part in bringing Eva Smith to her death. The Inspector leaves and it dawns on the Birling's that he might have not been a real Police Officer. Both the calls to the hospital where Eva Smith was supposed to have died and to the local police station establish that there was neither a suicide reported nor is there a police officer called Inspector Goole. ...read more.

It seems like he has a strange ghost like aura as he arrives and just stands watching the Birling family in their home. Special lighting and shadows also help increase suspense and tension also with melodramatic music; it helps set the scene to be sinister and powerful. During this scene the Birling family are having a discussion and Mr Birling is advising his family and telling them of his philosophies of life. How you are always number one priority in life and then family comes second. The repetition of the phrase look after yourself first and grab all opportunities, shows us Mr Birling's selfish behaviour and he doesn't even consider anyone else. As the Inspector enters the Birling house, the stage production shows us the house being prised open; we feel it is going to be exposed. He is here to challenge Mr Birling's philosophy. The Inspector speaks in very short sharp, simple yet direct sentences, as he first enters, he says very little and doesn't want to make an immediate judgement. When he first appears on stage, Priestley describes him in terms of 'massiveness, solidity, and purposefulness' symbolising the fact that he is an unstoppable force within the play. His 'disconcerting habit of looking at the person he addresses gives the impression that he sees through surface appearance to see the person underneath, which adds to the dramatic irony. It also gives him thoughtfulness that contrasts with the thoughtfulness of each character's treatment of the girl. As he enters he is described as a man in his fifties dressed in a 'plain darkish suit of the period' this makes his character seem very prominent, professional, empowering and dominant, especially as he enters, though he might not be a 'big man but creates an impression of massiveness.' We realise the Inspector is a mysterious character and his sombre appearance and the news he brings are a contrast with the happy and elegant air of celebration of the Birling family. ...read more.

Some have suggested that he is the spirit of the dead girl's child, who has come to torment the conscious of the characters. There are many interpretations of who the Inspector could be. Priestley did not want to give a concrete interpretation of who the Inspector is he left it a mystery. He didn't give the audience or the characters an idea of who or what the inspector was to give it a dramatic affect and so only assumptions can be made. Another interpretation of him is that the inspector is J.B Priestley who helps to fill in the missing links of the story, and it is what the author would have done in the situation. I think Priestley's main message of the play or his aim was to explain to society that if we are like the Birlings then we need to change, and be more considerate towards others. 'We are members of one body, we are responsible for each other.' This particular quote, sums up exactly what Priestley was trying to get across, mainly to the post war audience. He may have experienced difficulties during this time, this may have led him to believe that in order to live in a peaceful world we must consider responsibility to fellow men. Personally I believe that this would have made an impact on its audience, the message was very poignant considering the country had just suffered a Second World War. Priestley wants to bring awareness of responsibility and bring humanity and fellowship to the world around us. The Inspector's role is effective as he brings about the change and makes a sense of justice. Priestley putting himself as the inspector was also very effective; his function was to change the characters for the better and his greater message is to bring social awareness to the post war audience and maybe steer them to vote for a new government. In today's society it teaches us a strong message about responsibility and consideration for others. Nafisa Ahmad 10s ...read more.