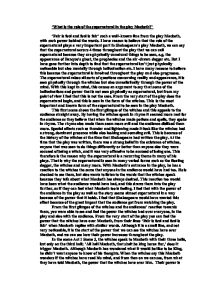 'What is the role of the supernatural in the play Macbeth?'

Lady Macbeth wants this to happen, and wants to make sure that this does happen. She speaks to herself 'unsex me here' telling the evil spirits to make her unfeminine so that she can commit the murder, she is praying to the devil; calling evil spirits to take away her good do that she can commit the murder. Being Macbeth's wife, she has the power to persuade him to commit the murder of Duncan so that he can become king. I think this is also a different form of the supernatural, showing good verses evil. I think that Shakespeare did this to show the clear contrast between what is good or natural and what is evil or unnatural, which is often represented as the supernatural. Macbeth is now tempted by what the witches have said, and what his wife is persuading him to do. But also Macbeth's ambitions play an important part in this, after all he is a free agent and so he can also make the decisions, even if he is encouraged to do the wrong thing. The witches almost represent Macbeth's evil ambitions, almost as if they too are unreal, just a trick of the mind. The witches have also taken power over lady Macbeth that makes it seem they have almost taken over Lady Macbeth's mind, the power of the witches is persuading and tempting Macbeth to commit the murder through Lady Macbeth. ...read more.

The supernatural isn't just physical or seen mysterious happenings but also mentally, that is why many would argue with the fact that the air-drawn dagger could be either supernatural or a trick of the mind. With the history of the witches at the time that the play was written, it added an even greater effect to the play, and had an even bigger impact with the audience. The supernatural is the evil in the world through different forms, in Macbeth's case, through his own mind. Because witches were hated so much at the time the play was written, Shakespeare composed the play; it was a perfect opportunity to use witches, so that the audience would be more interested and entertained in the play. The witches were the most well known form of supernatural occurring in the play because of their history. The supernatural is the plot of the play, without it, it would be dull and boring. I feel that the supernatural was a very entertaining part of the play and that as it increased I also became more entertained, the role of the supernatural is the role of the evil in our lives. The Evil in our thoughts, the unnatural beings that occur rather than the natural and good things that occurs in out life. Louise Farrugia ...read more.