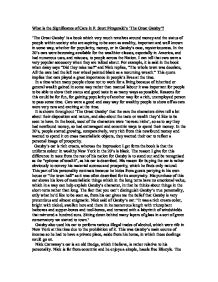 What is the Significance of Cars in F. Scott Fitzgerald's 'The Great Gatsby'?

What is the Significance of Cars in F. Scott Fitzgerald's 'The Great Gatsby'? 'The Great Gatsby' is a book which very much revolves around money and the status of people within society who are aspiring to be seen as wealthy, important and well known in some way, whether for popularity, money, or in Gatsby's case, mysteriousness. In the 20's cars were becoming available for the wealthier classes, especially in America, and had numerous uses, and misuses, to people across the Nation. I can tell that cars were a very popular accessory when they are talked about. For example, it is said in the book when daisy says "Did they miss me?" and Nick replies, "The whole town was desolate, All the cars had the left rear wheel painted black as a mourning wreath." This quote implies that cars played a great importance in people's lives at the time. In a time when many people chose not to work for a living because of inherited or general wealth gained in some way rather than manual labour it was important for people to be able to show their status and good taste in as many ways as possible. ...read more.

Nick is far from eccentric and he enjoys a simple, hassle free lifestyle. The Dodge shows that he wants a car for the freedom that it gives you and he's not too eccentric on what he spends on his car and is not bothered with trying to impress anyone. Tom Buchanan had a Coup�; I can take from this that, because it's a sporty car, he'd like to be seen as exactly that; sporty, social and popular. Onlookers would see a coup� as a fast car so it would add to his image of a luxurious and rapid lifestyle that was fashionable for him and his friends in that era. Coup�s were probably also seen as sexy in that era and Tom would have like to be seen as desirable, the car reflects the fact that he's been involved in numerous extra-marital affairs. The wealthy classes were, at this point in time, now able, with the use of cars, to commute to the city whenever they wanted, at their every whim. This resulted in many people would moving to the outer parts of the city, or suburbs, and this is obviously what these characters had done. ...read more.

Driving cars were also the cause of numerous accidents and deaths within the book. The first that is spoken of is an accident that happens outside Gatsby's house; "Fifty feet from the door illuminated a bizarre and tumultuous scene. In the ditch beside the road, right side up, but violently shorn of one wheel, rested a new coup� which had left Gatsby's drive not two minutes before." The death as a consequence from driving is Myrtle's, she is run over by Daisy in Gatsby's car as she speeds home. Cars were a hugely important factor and introduction into standards of general living in prosperous New York throughout 'The Great Gatsby'. The accident and death shows that 'The Great Gatsby' is not only a book about the conveniences of cars, but also the dangers and results of these fast indulgent lifestyles, it shows that cars aren't only fashionable but powerful and destructive and can cause huge impact on people's lives, whether in good ways, or bad. Their wild ways and dangerous, life-threatening, behavior shows that many of the leading characters in this book are over-indulged and, most important of all, intensely irresponsible ...read more.