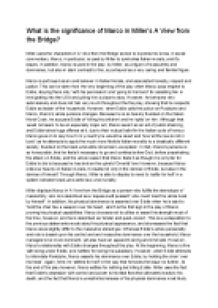 What is the significance of Marco in Millers A View from the Bridge ?

Transfer-Encoding: chunked ﻿What is the significance of Marco in Miller?s A View from the Bridge? Miller uses the characters in A View from the Bridge as tool to express his views, in social commentary. Marco, in particular, is used by Miller to symbolise Italian morals, and it's issues. In addition, Marco is used in the play, by Miller, as a figure of masculinity and dominance, but also in stark contrast to this, is portrayed as a very caring and familial figure. Marco is portrayed as an avid believer in Italian Morals, and associated honesty, respect and justice. This can be seen from the very beginning of the play when Marco pays respect to Eddie, staying there only ?with his permission? and ?going to his hand? for assisting him in immigrating into the USA and giving him a place to stay. However, he behaves very submissively and does not talk very much throughout the the play, showing that he respects Eddie as leader of the household. However, when Eddie calls the police on Rodolpho and Marco, Marco?s whole persona changes. ...read more.

This is a juxtaposition to the previous statements made about his physical appearance, and showcases the fact that Marco does slightly differ to the masculine stereotype. Whereas Eddie?s whole personality and role is based upon his control and and masculine dominance over the household, Marco manages to be more dominant, yet also have an apparent caring and kind side. However, Marco?s relationship with Eddie changes throughout the play. At the beginning, Marco is fine with being under Eddie, and ?settles? for being his subsidiary. However, when Eddie attempts to intimidate Rodolpho, Marco asserts his dominance over Eddie, by holding the chair ?over his head?. Again, here, he ?settles for half? in the way that he takes the issue no further. At the end of the play however, Marco settles for nothing but killing Eddie. Miller uses the fact that Eddie's obsession with control and power is his fatal flaw that ultimately leads to his death, and the fact that Marco?s unrestricted release of his physical dominance most likely leads to his incarceration to portray the need to ?settle for half? and to only assert dominance when required, rather than it be the foundation of your personality. ...read more.

When Marco is caught by immigration, his focus does not shift. He claims that Eddie ?killed his children?, showing the fact that his priority is still his family, even though he is being convicted. However, although family was important to him, his priority changes to upholding morals when he decides to go and kill Eddie. This almost decides Marco?s own fate, and deprives him of any more weeks he may have had on bail to further provide for his family. In this way, Miller showcases the need for familial responsibility, and how this should be a priority, as it is when Marco behaves like this that he is a sympathetic character for the audience. However, Miller also stresses the need for family to always be the priority, and the need to settle for half between family and morality, through Marco?s downfall. Overall, Marco is portrayed as a character whose personality and priorities change throughout the play. Generally, he is a responsible, caring, family minded character, who also is capable of asserting dominance when required. However, he is also the character who brings about the end of the play and his own demise, mainly due to his strong belief in Italian morals and his subsequent failure to ?settle for half?. ...read more.