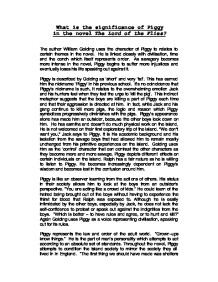 What is the significance of Piggy in the novel The Lord of the Flies?

What is the significance of Piggy in the novel The Lord of the Flies? The author William Golding uses the character of Piggy to relates to certain themes in the novel. He is linked closely with civilisation, time and the conch which itself represents order. As savagery becomes more intense in the novel, Piggy begins to suffer more injustices and eventually loses his life speaking out against it. Piggy is described by Golding as 'short' and very 'fat'. This has earned him the nickname 'Piggy' in his previous school. It's no coincidence that Piggy's nickname is such, it relates to the overwhelming emotion Jack and his hunters feel when they feel the urge to 'kill the pig'. This indirect metaphor suggests that the boys are killing a part of Piggy each time and that their aggression is directed at him. In fact, while Jack and his gang continue to kill more pigs, the logic and reason which Piggy symbolizes progressively diminishes with the pigs. ...read more.

Although he is easily intimidated by the other boys, especially by Jack, he does not lack the self-confidence to protest or speak out against the indignities from the boys. "Which is better - to have rules and agree, or to hunt and kill?" Again Golding uses Piggy as a voice representing civilisation, speaking out for its rules. Piggy represents the law and order of the adult world. "Grown-ups know things." He is the part of man's personality which attempts to act according to an absolute set of standards. Throughout the novel, Piggy attempts to condition the island society to mirror the society they all lived in in England. "The first thing we should have made was shelters down there by the beach.." Piggy's continual references to his auntie demonstrate this. "I used to live with my aunt...When'll your dad rescue us?" He tries to pull Ralph towards reason and logic. Throughout the novel, Piggy is often the one who comes up with ideas for Ralph to act out. ...read more.

Then we should know what the time was. " Piggy is the only link to civilisation after the other boys forgets the rules. Golding uses him to remind us successfully that the island is a microcosm to represent the world that it has separated from. Piggy is made an outcast by his undesirable physique and superior intelligence. This isolation and wisdom also helped Piggy to retain his civilized behaviour. As well, he was made painfully more aware of the great amount of injustice in the world. From the characters, it could be seen that under the same circumstances, different individuals can develop in different ways depending on the factors within themselves and how they interacted with each other. Their personalities and what they knew could determine how they would interpret and adapt to a new environment such as the tropical island. Not everyone has so much evil hidden inside them as to become complete savages when released from the boundaries of our society. Some people will, because of the ways they were conditioned, remember and abide by the rules they had depended on for social organization and security. Golding has successfully used Piggy to portray all these ideas and themes. ...read more.

This is an excellent essay. There is very adept insight into the character of Piggy and the allegorical resonance Golding created him with. There is excellent focus on Piggy's role within the book and the society of boys living on ...

This is an excellent essay. There is very adept insight into the character of Piggy and the allegorical resonance Golding created him with. There is excellent focus on Piggy's role within the book and the society of boys living on the island, and a good understanding of how his mistreatment allows him to sit outside the group and observe. He is much like Ralph, but the crucial differences are correctly identified here, as Ralph is more active and more respected due to a higher state of social comfortability. Where I think the candidate could improve is drawing comparison to Simon. Simon and Piggy are really the only two that remain permanently untouched by the innate evil within all men (the central theme of Golding's novel), and yet Golding drives this theme home by writing that Simon and Piggy are both killed at the hands of this initial judgement and ostracisation and ultimately the animalistic savagery the soon developed once civilisation had collapsed.

The Level of Analysis is good and attacks the complexity of a character like Piggy well. It discusses the purpose of Piggy within the novel, his relationships with the other characters (some very specific comments with regard to Ralph - perhaps more could be written with regard to his relationship with Jack though), and overall feels like the candidate has sensitively appreciated the value of the character to the novel as the intelligent, rational-thinker. I would say the candidate missed something quite obvious in that Piggy's glasses are a symbol of visual clarity - being able to, as they correctly identify, see things from an objective outsider's perspective. They are also in line with his intelligence and insight.

The Quality of Written Communication is very good. No major errors that would compromise the clarity of the essay are made, and their is no reason to penalise the candidate for problems with spelling, grammar and/punctuation as all are kept well in check throughout the answer.