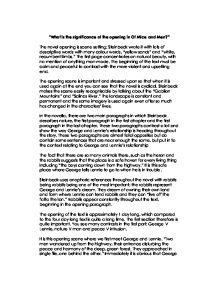 &quot;What is the significance of the opening in Of Mice and Men?&quot;

"What is the significance of the opening in Of Mice and Men?" The novel opening is scene setting; Steinbeck wrote it with lots of descriptive words with many colour words, "yellow sands" and "white, recumbent limbs." The first page concentrates on natural beauty, with no mention of anything man-made. The beginning of the text must be calm and peaceful to contrast with the more violent and upsetting end. The opening scene is important and stressed upon so that when it is used again at the end you can see that the novel is cyclical. Steinbeck makes the scene easily recognisable by talking about the "Gabilon Mountains" and "Salinas River." The landscape is constant and permanent and the same imagery is used again even after so much has changed in the characters' lives. In the novella, there are two main paragraphs in which Steinbeck describes nature, the first paragraph in the first chapter and the first paragraph in the last chapter. These two paragraphs contrast a lot and show the way George and Lennie's relationship is heading throughout the story. These two paragraphs are almost total opposites but do contain some sentences that are near enough the same, but put in to the context relating to George ...read more.

Even in their movements, they are complete opposites. George is quick and compact, he moves with confidence and composure. Lennie tries to do likewise but ends up walking "heavily, dragging his feet a little." In the opening dialogue, George is shouting at Lennie for drinking too much. George is looking out for Lennie; he is commanding and strict, but also caring. George has the qualities of a father towards Lennie but his immediate anger also hints at possible frustration and tension. Unlike his friend, Lennie is in a world of his own. He takes no notice of George's warnings and continues to "dip his whole head, hat and all" under the water In part one we see many different sides to Lennie's character, He is a huge man, gifted with incredible strength, but also deprived of any common sense or maturity. Steinbeck regularly describes him in animal terms: "dabbed his big paw", "snorting... like a horse." These metaphors help to give an idea of Lennie's abilities and his undeveloped state of mind. He has the labouring strength of a horse, but also the kind of animal innocence, which leaves him easily influenced. ...read more.

George often insults Lennie and 'gives him hell', but he does not really mean it. Although he often talks about how well off, he could be without Lennie he secretly does not want Lennie to leave, and when Lennie offers to do so in the first chapter, George virtually pleads with him to stay. This is because George also depends on Lennie to a certain extent for his unconditional friendship. George and Lennie are two contrasting characters yet 'opposites attract' and they have built up a friendship. George and Lennie are different but both have something to give each other: companionship being a major aspect but George gives Lennie a 'parent' and Lennie gives George a purpose in life. George has matured a lot since the incident he relates to Slim where he made Lennie jump into a river just for fun. He realises that Lennie depends on him, and needs him to survive. Lennie craves the relationship of a parent figure, which is what George represents and also something like the rabbits, which he can pet, he would like to care for them, as they would bring him extra comfort. Lennie, like a small child just wants something of his own to care for but finds it difficult as he is so large and clumsy he ends up killing them, like with the mouse. ...read more.