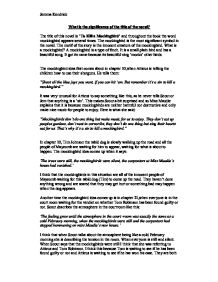 What is the significance of the title of the novel? The title of this novel is 'To Kill a Mockingbird' and throughout the book the word mockingbird appears several times. The mockingbird is the most significant symbol in the novel. The motif of the story is the innocent creature of the mockingbird. What is a mockingbird? A mockingbird is a type of finch. It is a small plain bird and has a beautiful song. It got its name because its beautiful sing 'mocks' other birds. The mockingbird idea first comes about in chapter 10,when Atticus is telling the children how to use their shotguns. He tells them: "Shoot all the blue jays you want, if you can hit 'em. But remember it's a sin to kill a mockingbird." It was very unusual for Atticus to say something like this, as he never tells Scout or Jem that anything is a 'sin'. This makes Scout a bit surprised and so Miss Maudie explains that it is because mockingbirds are neither harmful nor destructive and only make nice music for people to enjoy. Here is what she said: "Mockingbirds don't do one thing but make music for us to enjoy. They don't eat up peoples gardens, don't nest in corncribs, they don't do one thing but sing their hearts out for us. ...read more.

Mr Underwood is likening Tom to a mockingbird/songbird. As a mockingbird is not harmful or a horrible creature but a nice peaceful one, Tom Robinson was a quiet family man who had done nothing wrong. His death was an injustice. In chapter 28,the children (Jem and Scout) are walking home from their school Halloween play. It is night time and so everywhere is dark and cold. The idea of the mockingbird appears when it says: 'High above us in the darkness a solitary mocker poured out his repertoire in blissful unawareness of whose tree he was sat in.' I think this is likening the children to mockingbirds because the mocking bird is innocent and unaware of whose three he is sat in and the children are innocent and unaware of what us about to happen next. In chapter 30,Atticus and Heck Tate are deciding what to do about the situation of Bob Ewells death. Both Atticus and Heck know that Boo killed Bob to save and help the children but to arrest Boo would probably kill him. Scout over-heard and says: "It'd be sort of like shootin' a mockingbird." This is saying that to arrest an innocent creature like Boo and make it public would kill him. They need to protect him as they have already lost one mockingbird (Tom Robinson) ...read more.

Also by her father telling her this it helps her to understand her father and what he has to do. She understands that he has to defend innocent people like Tom Robinson that have done no wrong. Over the course of this book Scout learns different lessons. She learns from Calpurnia that she should be polite to everyone, from Aunt Alexandra the value of being a lady and from Heck and Atticus the problems that could be caused by the society's prejudice. I think that over the course of this novel Scout comes out to be quite clever and forever learning new morals and ways of life. By the end of the novel she has learnt one key lesson. That she must see thing's from other people's views. She shows this in the book in the last chapter when she is standing on Boo Radley's front porch. Here is the quote on what she said: "Atticus was right. One time he said you never really know a man until you stand in his shoes and walk around in them. Just standing on the Radley porch was enough." Here she puts herself in Boo Radley's shoes and imagines what it must be like for him. My final impression of Scout is that after all what she has been through she has become wiser and more grown up. She has learnt important values to life and has become more caring and understanding. Jemma Kendrick ...read more.