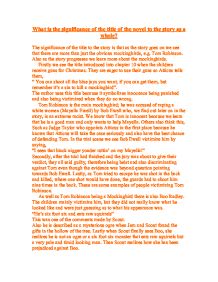 What is the significance of the title of the novel to the story as a whole?

What is the significance of the title of the novel to the story as a whole? The significance of the title to the story is that as the story goes on we see that there are more than just the obvious mockingbirds, e.g. Tom Robinson. Also as the story progresses we learn more about the mockingbirds. Firstly we see the title introduced into chapter 10 when the children receive guns for Christmas. They are eager to use their guns so Atticus tells them, " You can shoot all the blue jays you want, if you can get them, but remember it's a sin to kill a mockingbird". ...read more.

Secondly, after the trial had finished and the jury was about to give their verdict, they all said guilty, therefore being beist and also discriminating against Tom even though the evidence was beyond question pointing towards Bob Ewell. Lastly, as Tom tried to escape he was shot in the back and killed, where one shot would have done, the guards had to shoot him nine times in the back. These are some examples of people victimizing Tom Robinson. As well as Tom Robinson being a Mockingbird there is also Boo Radley. The children mainly victimize him, but they did not really know what he looked like and were just guessing as to what his appearance was. ...read more.

Helen Robinson is victimized once again by bob who follows her home from work and taunts her. Lastly Dolphus Raymond is victimized by the public for being a stupid drunk, when really he is drinking coke instead of alcohol, which is what they think he does drink. The Mocking bird is used in this novel as an example of what can happen to innocent people, who like the mocking bird do nothing but try to help us. It is used to explore the prejudices and victimization of people in the novel such as Tom and Boo. The only hope lies with children such as Jem and Scout, who apart from curiosity show no prejudice or victimization towards anybody black or white. ...read more.