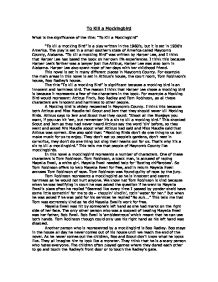 What is the significance of the title: &quot;To Kill a Mockingbird&quot;?

To Kill a Mockingbird What is the significance of the title: "To Kill a Mockingbird" "To kill a mocking Bird" is a play written in the 1960's, but it is set in 1930's America. The play is set in a small southern state of America called Maycomb County, Alabama. "To kill a mocking Bird" was written by Harper Lee, and I think that Harper Lee has based the book on her own life experiences. I think this because Harper Lee's farther was a lawyer just like Atticus, Harper Lee was also born in Alabama. Harper Lee also spent most of her days with her childhood friend. This novel is set in many different places in Maycomb County. For example the main areas in this novel is set in Atticus's house, the court room, Tom Robinson's house, Boo Radley's house. The title "To kill a mocking Bird" is significant because a mocking bird is an innocent and harmless bird. The reason I think that Harper Lee chose a mocking bird is because it represents a few of the characters in the book. For example a Mocking Bird would represent: Atticus Finch, Boo Radley and Tom Robinson, as all these characters are innocent and harmless to other people. ...read more.

But when he was asked if he was paid for his services he replied "No suh...." This tells me that Tom was extremely kind as he did Mayella Ewell's work for free. Mayella Ewell was hit by someone's left hand as she had marks on the right side of her face. The only other person who was a suspect of beating Mayella Ewell was her father, Bob Ewell. Bob Ewell is 'ambidextrous' which meant that he can use both hands. Tom Robinson though could only use his right hand as his left hand was disabled. Another person who is represented by a mockingbird is Boo Radley. Boo stays in the house all day he never comes out of his house until we reach the end of the novel. As he never comes out the children, Boo and Scout don't know what he looks like. They all imagine him to look like a monster. They think that he is a scary person who hates everyone. The children often played games where they dared each other to go and touch the Radley's front door or to touch the Radley's gate. ...read more.

She always questions people's decisions and what people say. Scout was obviously appalled by the jury's verdict of finding Tom guilty, as she and many people in the court room and the audience probably thought Tom was innocent. Atticus was also disappointed but saw the defeat as a moral victory. He saw it, as a moral victory because it took the jury over three hours to decide the verdict for Tom, when usually it would have taken about five minutes to decide a verdict, for a black man who was always found guilty. Reverend Sykes, a black priest, tells Jem that he has never 'ever seen a jury decide in favour of a coloured man over a white man'. This tells me that the members of the jury were always racist. In conclusion, I think that the title 'To Kill a Mockingbird' was quite significant as it represented number of characters in the book. Harper Lee helps us understand how much people respect Atticus and how Scout and Jem look up to Atticus and see him as a role model. Harper Lee also helps us to understand the problems that were around the 1930's. Some of the problems were sexism, racism, social class, politics etc......... Harper Lee helps us to see that Jem and Scout mature as they grow older. ...read more.