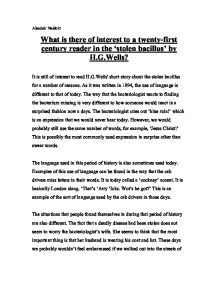 What is there of interest to a twenty-first century reader in the 'stolen bacillus' by H.G.Wells?

Alasdair Naisbitt What is there of interest to a twenty-first century reader in the 'stolen bacillus' by H.G.Wells? It is still of interest to read H.G.Wells' short story about the stolen bacillus for a number of reasons. As it was written in 1894, the use of language is different to that of today. The way that the bacteriologist reacts to finding the bacterium missing is very different to how someone would react in a surprised fashion now a days. The bacteriologist cries out 'blue ruin!' which is an expression that we would never hear today. However, we would probably still use the same number of words, for example, 'Jesus Christ!' This is possibly the most commonly used expression in surprise other than swear words. The language used in this period of history is also sometimes used today. Examples of this use of language can be found in the way that the cab drivers miss letters in their words. It is today called a 'cockney' accent. It is basically London slang. 'That's 'Arry 'Icks. Wot's he got?' This is an example of the sort of language used by the cab drivers in those days. ...read more.

The anarchist is a very devious person. The way that he manages to get himself into the bacteriologist's laboratory is very clever but could easily be done by anyone. The way he managed to take his opportunity of taking the live cholera germ is masterful in his own eyes. He thinks so highly of himself and yet thinks that he world is against him because of his brilliance. Theses people are very odd. The way that they seem to want to get back at the world because of all the pain and suffering it has given them is strange. Some of them just want to kill a policeman, taking their own life with them, whereas others want to poison the water supply of London, all this just to be recognized as one of the brilliant minds of the world. Unfortunately, they haven't got a clue. They are so full of their arrogance that they seem to forget that people are not actually plotting against them; they want to think that they are being victimized. At the beginning of the 20th century more and more people were starting to think more individually instead of rich and important people doing it for them and it was around this time that many more anarchists who believed in many different and unusual ethics. ...read more.

It comes very suddenly at the end of the story and the fact that he is given the wrong impression as to what is contained in the bottle makes it humorous. The characters that Wells uses are people that Wells is trying to make seem common Londoners of the time. The bacteriologist is a very kind person because whenever his wife asks to speak to him, he is never rude by telling her to go away because he is busy. He is also very kind to the anarchist by letting him look at the germ under a microscope and showing him how to use the microscope with no sense of anger or annoyance being portrayed at all because he knows that most people don't know how to use such an instrument. During the whole story, the bacteriologist never shows any anger at either himself or anyone else, even though he was stupid enough to leave the anarchist alone with the germ. Minnie gives the sense that she is the bossy type by the way that she treats her husband as if he was a young child, making sure that he wears his coat and shoes whenever he goes outside, for the main reason that he may cause embarrassment to her or him. ...read more.