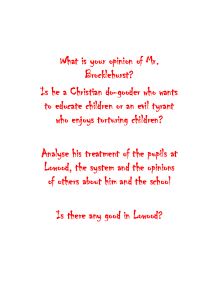 What is your opinion of Mr. Brocklehurst?

What is your opinion of Mr. Brocklehurst? Is he a Christian do-gooder who wants to educate children or an evil tyrant who enjoys torturing children? Analyse his treatment of the pupils at Lowood, the system and the opinions of others about him and the school Is there any good in Lowood? Carla Haughey VC Jane's first meeting with Mr. Brocklehurst is set up through the image of the "stiff" unyielding door-handle, which is perhaps hinting at Brocklehurst's character. Jane's first impression of Brocklehurst is that of a "black pillar," a "straight, narrow, sable-clad shape standing erect on the rug; the grim face at the top was like a carved mask." Jane's description of this "stony stranger" makes him appear cold and stone-like. His features and "all the lines of his frame were equally harsh and prim," he has an arrogant, rigid disposition. Jane's humorous description of Brocklehurst's face echoes that of the wolf in Red Riding Hood, "What a face he had ... what a great nose! And what a mouth! And what large prominent teeth," these wolf-like qualities show Brocklehurst's predatory nature. It is ironic that Brocklehurst who appears to be a religious man, uses his religious beliefs to scare children, his favourite part of Christianity seems to be Hell. Brocklehurst tells Jane that if she "were to be called hence" she would fall into "a pit full of fire" and burn there forever. ...read more.

The incident ought not to be neutralised by replacing with something more delicate the comfort lost." He is a hypocrite; he tells Miss Temple that while she "puts bread and cheese, instead of burnt porridge, into these children's mouths, you may feed indeed their vile bodies, but you little think how you starve their immortal souls!" While at Lowood he spots a girl with curly hair, who "conforms to the world so openly - here in an evangelical, charitable establishment." When Miss Temple informs him that the girl's hair curls naturally, he contradicts himself saying that "we are not to conform to nature" either. He then orders that her and all the other first form shall have their hair cut off. Brocklehurst is small-minded, he calls curly hair an "excrescence" Brocklehurst makes a speech outlining his ethos; he wants to "render them hardy, patient, self-denying." Bront� uses bitter irony when she deliberately misconstrues Christ's words "If ye suffer hunger or thirst for my sake happy are ye." Miss Temple understands this unwitting irony. Brocklehurst then goes on to say that his mission is "to mortify in these girls the lusts of the flesh," but is interrupted by his wife and daughters who were "splendidly attired in velvet, silk and furs." Their arrival totally undercuts his moral and spiritual message. ...read more.

Lowood later becomes a "cradle of fog and fog bred pestilence," and the girls become seriously ill. Miss Temple stays in the sick room with the girls and Helen whose condition is deteriorating, is cared for in Miss Temple's room. On her last night Jane goes to see her, the intimacy and love of both girls is evident and pathos is generated through the simplicity of language and Jane's proximity to Helen in her "little crib." Helen dies in Jane's arms. The treatment of the girls at the hands of Brocklehurst is later discovered and conditions at Lowood improve -"the school ... became a truly useful and noble institution." Bront� claimed, "conventionality is not morality." For a woman to come out with these ideas was shocking, she was aware of the injustices of the Victorian class system which allowed hypocrites, like Brocklehurst, to flourish while good people, like Jane and Helen, endured criticism and punishment simply because they were poor. "Angels" like Helen Burns are despised by fellow man whereas people like Brocklehurst are revered in society. He is a true villain and a hypocrite; he lives in the lap of luxury but exploits his religious beliefs to justify his harsh treatment of the girls. "Such is the imperfection nature of man! Such spots are there on the disc of the dearest planet; and eyes like Miss Scatcherd's can only see through those minute defects, and are blind to the full brightness of the orb." ...read more.