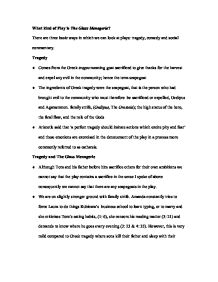 What kind of Play is The Glass Menagerie?

What kind of Play is The Glass Menagerie? There are three basic ways in which we can look at plays: tragedy, comedy and social commentary. Tragedy * Comes from the Greek tragos meaning goat sacrificed to give thanks for the harvest and expel any evil in the community; hence the term scapegoat * The ingredients of Greek tragedy were the scapegoat, that is the person who had brought evil to the community who must therefore be sacrificed or expelled, Oedipus and Agamemnon. family strife, (Oedipus, The Oresteia); the high status of the hero, the fatal flaw, and the role of the Gods * Aristotle said that 'a perfect tragedy should imitate actions which excite pity and fear' and these emotions are exorcised in the denouement of the play in a process more commonly referred to as catharsis. Tragedy and The Glass Menagerie * Although Tom and his father before him sacrifice others for their own ambitions we cannot say that the play contains a sacrifice in the sense I spoke of above consequently we cannot say that there are any scapegoats in the play. * We are on slightly stronger ground with family strife. Amanda constantly tries to force Laura to do things Rubicam's business school to learn typing, or to marry and she criticises Tom's eating habits, (1: 6), she censors his reading matter (3: 21) and demands to know where he goes every evening (3: 23 & 4: 33). However, this is very mild compared to Greek tragedy where sons kill their father and sleep with their mother, where wives slice open their husbands as they relax in the bath, and where sons plunge swords into the breasts which once fed them milk. * Also, we cannot say that the hero, Tom, has a high status since he lives in a lower middle class area, works at Continental Shoes, and because his mother never married any of her gentleman callers who were prominent planters (1: 8-9), instead she married 'a telephone man who fell in love with long distances and skipped the light fantastic out of town' (1: 5). ...read more.

Later he refers to Chamberlain (5: 39) who famously declared, after his meeting with Hitler, that there would be 'peace in our time'; his blindness to what was happening parallels Amanda's refusal to face facts. The whole of American society is seen to be withdrawn from reality: 'In Spain there was Guernica! But here there was only hot swing music and liquor, dance halls, bars, and movies, and sex that hung in the gloom like a chandelier and flooded the world with brief deceptive rainbows' (ibid.). Note the connection between the chandelier and the glass menagerie, both are associated with being removed from the world. We should not forget Tom's frequent visits to the movies here either since it is something of a truism that during the 1930s, the period when the play is set, Hollywood was churning out Busby Berkley musicals as a way of taking people's mind off the great depression started by the Wall Street crash in 1929 (6: 61). * We need to try and understand the idea of 'escapism' in a bit more depth. At one point Amanda says that she is 'bewildered by life' (2: 13) so one reason why people retreat into dreams is because they do not have the means to understand what is happening around them. Let's look more closely at that. * The stage directions tell us that the Wingfield family live in a 'hive-like conglomeration' with other 'lower middle class' people all of whom are 'enslaved' and who 'function as one interfused mass of automatism' (3). This is a harsh version of comic loss of identity and communal celebration. * The character of work in this society is not fulfilling. If she had stayed at the college, Laura would have taken down other people's words and typed out other people's thoughts. Tom would rather die than have to go work at Continental Shoemakers everyday (3: 23). ...read more.

But perhaps this is a too optimistic reading. After all Amanda, at the end of the play uses the word 'crippled' (7: 96). She has ceased to try and change reality and has instead come to accept it. Conclusion * What kind of play is The Glass Menagerie? It contains bits of tragedy, bits of comedy but is neither. It concentrates on social problems but is far more poetic than practical. * It is in short a mixture of numerous elements that like the innocent look of the absent father 'enchants' us (5: 46) but does not educate us. It shows what can be done with theatre but not what theatre can do for the world. This is because it has severed its connection with the world in the sense that it is a degradation of different theatrical genres all of which related to the world in specific ways. The Glass Menagerie offers the comfort of illusion. somewhere i have never travelled, gladly beyond somewhere i have never travelled, gladly beyond any experience, your eyes have their silence: in your most frail gesture are things which enclose me, or which i cannot touch because they are too near your slightest look will easily unclose me though i have closed myself as fingers, you open always petal by petal myself as Spring opens (touching skillfully, mysteriously) her first rose or if your wish be to close me, i and my life will shut very beautifully ,suddenly, as when the heart of this flower imagines the snow carefully everywhere descending; nothing which we are to perceive in this world equals the power of your intense fragility: whose texture compels me with the color of its countries, rendering death and forever with each breathing (i do not know what it is about you that closes and opens; only something in me understands the voice of your eyes is deeper than all roses) nobody, not even the rain, has such small hands From Complete Poems: 1904-1962 by E. E. Cummings, edited by George J. Firmage. Copyright (c) 1976, 1978, 1979 by George James Firmage. ...read more.