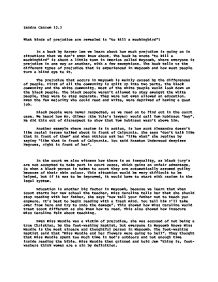 What kinds of prejudice are revealed in &quot;to kill a mockingbird&quot;?

Sandra Canrom 10.3 What kinds of prejudice are revealed in "to kill a mockingbird"? In a book by Harper Lee we learn about how much prejudice is going on in situations that we don't even know about. The book he wrote "to kill a mockingbird" is about a little town in America called Maycomb, where everyone is prejudice in one way or another, with a few exceptions. The book tells us the different types of prejudice that is experienced in Maycomb and how most people turn a blind eye to it. The prejudice that occurs in Maycomb is mainly caused by the differences of people. First of all the community is split up into two parts, the black community and the white community. Most of the white people would look down on the black people. The black people weren't allowed to stay amongst the white people, they were to stay separate. ...read more.

So when a black person is taken to court they are automatically assumed guilty because of their skin colour. This situation would be very difficult to be helped, but if it was to be improved, it would have to start with racism in the legal system. Education is another big factor in Maycomb, because we learn that when Scout starts her new school the teacher, Miss Caroline tells her that she should stop reading with her father, she says "now tell your father not to teach you anymore. It's best to begin reading with a fresh mind. You tell him I'll take over from here and try to undo the damage". This showed how Miss Caroline would treat Scout different as she knew how to read. This also showed how insecure Miss Caroline felt about teaching. ...read more.

At one point we see that she doesn't want Scout socializing with the Cunninghams, As she thought her way of life was best. She tries to persuade Scout from keeping away from them, but Scout disagrees and thinks its wrong. There was indeed a caste system in Maycomb, it seemed to work this way; the older citizens, the present generation of people who lived side by side for years and years, the rich people, the poor people and the black people. As a result the town remained the same for a hundred years, an island in a patchwork sea of cottonfields and timbaland. Although Maycomb was ignored during the war between the states, reconstruction rule and economic ruin forced the town to grow. It grew inward. New people rarely settled there, the same families married the same families until everyone looked almost alike. This town was definitely a victim of prejudice, the town had a mixture of different types. The one though which suffered the most, was the racism issue. ...read more.