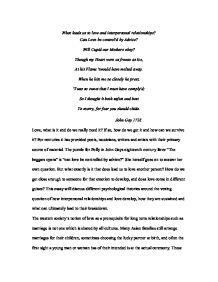 What leads us to love and interpersonal relationships?

What leads us to love and interpersonal relationships? Can Love be control'd by Advice? Will Cupid our Mothers obey? Though my Heart were as frozen as Ice, At his Flame 'twould have melted away. When he kist me so closely he prest, 'Twas so sweet that I must have comply'd; So I thought it both safest and best To marry, for fear you should chide. John Gay 1728 Love, what is it and do we really need it? If so, how do we get it and how can we survive it? For centuries it has provided poets, musicians, writers and artists with their primary source of material. The puzzle for Polly in John Gays eighteenth century farce "The beggars opera" is "can love be controlled by advice?" She herself goes on to answer her own question. But what exactly is it that does lead us to love another person? How do we get close enough to someone for that emotion to develop, and does love come in different guises? This essay will discuss different psychological theories around the vexing question of how interpersonal relationships and love develop, how they are sustained and what can ultimately lead to their breakdown. The western society's notion of love as a prerequisite for long term relationships such as marriage is not one which is shared by all cultures. ...read more.

These definitions of companionate love correspond to the feelings described by Rubin in his love scale and can be applied to same sex friends as well as romantic partners. This begins to address the different styles of loving between the sexes as Rubin suggested that females reported loving their friends more than males did. Rubin and McNeil (1983) suggest that loving for men may be channelled into single, sexual relationships while women may be better able to experience attachment and intimacy in a wider range and variety of relationships. (Gross, 1996, p.382) This may go some way to explaining the stereotypical male who is commitment shy, i.e. if all the eggs are to be put in one basket then it is very important to make sure it is the right basket without even the slightest suggestion of doubt! The western pattern of romantic love leading to commitment and companionate love would suggest a series of stages. For a relationship to get started there should be an initial attraction, followed by a building of the relationship and a decision to commit to each other. The initial attraction is what would lead to "falling in love" and certain factors, it is claimed, would have to be in evidence. ...read more.

It is highly unlikely that two people living in close contact with one another and sharing their lives together will not have periods of conflict and disagreement. What is unique to each couple is how they deal with, and resolve, these conflicts. The methods used can be either positive, relationship enhancing techniques, such as voicing concerns and increasing communication, or negative, relationship destroying methods, such as withdrawal and ultimately desertion. The way a person deals with conflict may be influenced by factors outside of the relationship and irrespective of adult maturity. Factors such as social class or patterns shown by role models and indeed by experiences in relationships in the past. "Changes in adult thought, behaviour and personality are less a result of chronological age or specific biological changes and are more a result of personal, social and cultural events and forces..." (Craig in Gross, 1996, p.605) So "can love be controlled by advice?" It would seem that in the case of romantic love then no. In theory it may be possible to sustain a commitment type of love by decision rather than desire, but even then a certain number of factors must be present. Given that love is capable of causing both intense pain and incredible joy, do we really want to deny ourselves the roller coaster ride of emotions that differentiates us from other species. ...read more.