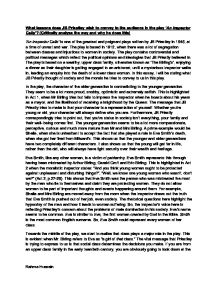 What lessons does JB Priestley wish to convey to the audience in the play An Inspector Calls? (Critically analyse the way and why he does this)

What lessons does JB Priestley wish to convey to the audience in the play 'An Inspector Calls'? (Critically analyse the way and why he does this) 'An Inspector Calls' is one of the greatest and poignant plays written by JB Priestley in 1945, at a time of unrest and war. The play is based in 1912, when there was a lot of segregation between classes and injustices to women in society. The play contains controversial and political messages which reflect the political opinions and ideologies that JB Priestly believed in. The play is based on a wealthy, upper class family, otherwise known as 'The Birling's', enjoying a dinner as their daughter is getting engaged to an aristocrat, until a mysterious Inspector walks in, leading an enquiry into the death of a lower class woman. In this essay, I will be stating what JB Priestly thought of society and the morals he tries to convey to us in this play. In the play, the character of the older generation is contradicting to the younger generation. ...read more.

For example, Sheila and Mrs Birling are moved away from the room when the Inspector draws out the truth that Eva Smith is pushed out of her job, even society. The rhetorical questions here highlight the hypocrisy of the men and how it leads to women suffering. So, the Inspector's voice here is reflecting Priestley's concern about the problems of male domination in his society. Eva's name seems to be common. Eva is similar to Eve, the first woman created by God in the Bible. Smith is the most common English surname. So, Eva Smith could represent every woman of her class. Towards the middle of the play, we start to realise that class plays a major role in the play. This is evident when Mr. Birling refers to Eva as "a girl of that class." The vital message that Priestley is trying to express to us is that social class determines the decisions you make. If you are from an upper class family in the early twentieth century, you are obviously going to look down at the lower class, unless you are part of a committee that supports them. ...read more.

There is, Priestley observes, such a thing as society, and he argues that it is important that people must be aware of the effects of their actions on others. The Birling's, of course, initially do not think at all about how they might have affected Eva Smith, but they are forced to confront the likely responsibility over the course of the play. Overall, JB Priestley's message to us, through the voice of the Inspector, is that social class, snobbery and guilt is not the answer to a stable society. Responsibility and trust is the foundation brick to a committed society, if it goes wrong, it will be very difficult to rebuild the damage it left. The final and the most significant message that JB Priestley tells us is that we all have a social duty to help and care for others. Priestley wanted to make the most of the setting and the time of the play as he encourages people to seize the opportunity the end of the war had given to Britain to build a better, socialist and more caring society. ?? ?? ?? ?? Rahma Hussein ...read more.