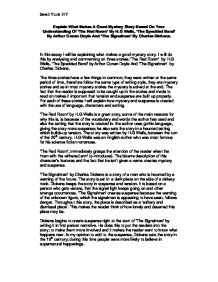 What makes a good mystery story

'The Signalman' by Charles Dickens is a story of a man who is haunted by a warning of the future. The story is set in a dark place on the side of a railway track. Dickens keeps the story in suspense and tension. It is based on a person who gets visions, that the signal light keeps going on and other strange occurrences. 'The Signalman' creates suspense because the warning of the unknown figure, which the signalman is appearing to have seen, follows danger. Throughout this story, the place is described as a 'solitary and dismissal place'. This makes the reader think of how lonely and deserted this place may be. Dickens begins to create suspense right at the start of 'The Signalman' by writing it in first person narrative. He does this to put the readers into the story; to make them more involved and it makes the reader want to know what happens next. ...read more.

Around the time that this story was written, people had gained a fascination with the criminal mind; they liked the idea of the 'clumsy' criminal being outsmarted and captured by the 'genius' detective. I studied three short stories, 'The Red Room', 'The Signalman' and 'The Speckled Band'. The stories are all linked together as they all have a sense of mystery. All of the stories were written before 1914. Three different stories, all of mystery trying to keep the reader gripped until the ending, each story keeps the reader in suspense by using what is called a 'hooking device'. To keep the reader reading, the author needs to use a successful 'hooking device'. In my opinion to achieve a good mystery story; simplicity is the key. For example, if you have a complicated plot the story can be hard to follow and if there are a lot of characters, then you can't build up the reader's pity and understanding of a single character. ?? ?? ?? ?? Sanah Yunis 11Y ...read more.